Booongo Goes Spiritual with the Release of Buddha Fortune Slot 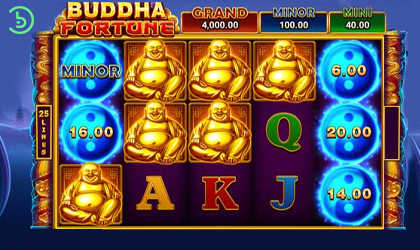 Booongo is going for a zen experience with its latest release called Buddga Fortune.

Although it has one of the most spiritual characters known to man as inspiration, the new…

…game does bring all kinds of materialistic rewards. Players lucky enough to get any of them are in for a wild ride.

A Theme that Keeps on Giving:

The developer’s latest creation is a special one. The game takes players on a real traditional Chinese journey that can potentially result in plenty of rewards.

Fans of the genre will be pleased to know that…

…this title has its own flavor. In other words, it isn’t just another version of the same old, same old. The action takes place on a wild field out in the countryside. Everything in the background has a neon glow to it, which depicts the bright moonlight.

The view of the field is interrupted by two cherry blossom trees on each side of the reels, which are there to remind us of what genre this game belongs to.

…of that same iconography. Symbols come in the form of rather neutral looking card royals while the higher paying tier features all kinds of animals. There are also ying-yang symbols and of course the Golden Buddha symbol.

As expected, the game comes with a traditional soundtrack that adds that little extra immersion factor.

Where most slots of this genre tend to bring a classic experience, the supplier went the other way. This 5x3 slot game offers a plethora of thrilling special features.

…drawing 6 or more bonus symbols during the base game. Once triggered, all of the symbols turn into the glowing ying-yang icon. The main difference is that each one brings a multiplier.

There is also the jackpot feature built into…

…the bonus game mode, making this an even more attractive package. Lastly, there’s also the Mystery symbol. Several of these can appear during the Bonus Game, each one opening up to reveal potentially exciting prizes!

Yuriy Muratov, Head of Account Management and Business Development for the brand, offered his take on the new release: “What we enjoy most at Booongo is designing games that make for memorable experiences, and Buddha Fortune is certain to match the expectations of players searching for fulfillment. Featuring popular Hold and Win mechanics, Buddha Fortune also combines a relaxing Far Eastern influenced soundtrack and beautifully designed graphics to create an atmospheric game that would make a great addition to any operator’s offering.”