Booongo Brings Back the Fiery Breath in 15 Dragon Pearls Slot 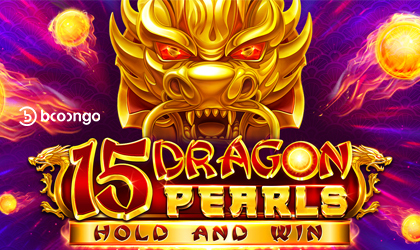 Booongo has some pretty exciting news for the fans of its most successful slot game – Dragon Pearls.

Namely, this popular software provider has announced the release of…

…a brand-new slot game that is the sequel to Dragon Pearls. They’ve conveniently named it 15 Dragon Pearls and packed with awesome features all around.

The Formula that Works:

The brand’s latest release brings a nostalgic experience. This popular software provider has decided to revamp one of its older but highly successful titles.

… is a worthy tribute to the original. That said, the new title also brings a vibe of its own. The game is predictably done in the traditional Asian style, featuring all of the symbolism and design details one would expect from such a game. In other words, the background comes in the form of a simple red texture that serves to give the reel frame and reels themselves some contrast.

Speaking of the reels, the symbols are definitely what sets this game apart. As usual, there are two tiers of symbols.

…comes in the form of golden dragons, golden frogs, all kinds of gold coins, and more. Overall, the release remains true to its roots when it comes to visuals.

The 5x3 slot game that runs on 25 fixed paylines. Usually, games of this type fall within the classic slot category or are at least trying to mimic that genre. That’s not really the case with this particular game.

Instead, it feels like the supplier went for a more modern take that includes a great Bonus Spin mode, as well as the bonus game. The bonus game is triggered when 6 orange pearls are collected.

Once that happens, the…

…symbols on the reels turn into pearls where each pearl carries a multiplier. There are also green and blue pearls that each carries massive values.

Overall, the game feels very much like the original but brings refreshing improvements across the board.

Yuriy Muratov, Head of Account Management and Business Development for the brand, said: “Following on from the incredible success of Dragon Pearls, we’ve taken one of our best-performing releases to another level of player experience in this new version with more action than ever before. The huge Grand Jackpot prize that’s on offer through 15 Dragon Pearls is sure to make this latest installment appealing to new and existing Booongo fans, with more bonus symbols than ever before sure to create a breathtaking gaming experience.”