Booming Games Has Announced the Release of Gladiator Arena Slot 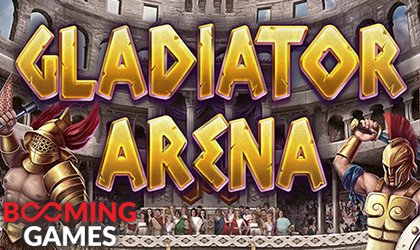 Packed with thrilling features and a theme that takes players straight into the world of gladiators, wild beasts and blood sports.

At the Heart of Colosseum:

The developer’s latest release is all about the ancient battles that were held in arenas all over the Roman Empire.

Players will get to experience what it was like to…

…be a fighter eager to defeat their next enemy and ensure survival. The entire aesthetic of the game is spot on when it comes to bringing this atmosphere to the reels. The background image depicts the Colosseum with its mighty pillars and massive stands.

At the center sits the emperor with his entourage. The developer has invested a decent amount of effort into making this game look immersive and entertaining at the same time. Symbol design is even more special. Namely, the team behind the brand went with the card royals for the lower-paying set, which was to be expected. It is the higher paying set that stands out.

Players will get to see various gladiators wielding different weapons. There will also be chariot wilds and lion symbols.

The Reels that Keep on Spinning:

At the core of the title sits a 5x3 reel grid that runs on 20 paylines. This slot belongs to the medium volatility camp with its base game. However, stepping out from the base game experience is where things get much more interesting. Namely, players have a chance to trigger one of several special features.

There are expanding wilds as well as a bonus spin mode where players have to choose one of three available doors. Depending on which door they go with, they can expect 8, 10 or 12 bonus spins. The star of the show is the so-called Battle feature where players are pitted against various opponents. Every opponent brings different multipliers ranging from 15x to 1000x.

This means that the game isn’t all RNG, but rather allows players to actually influence the gameplay.

Shane Cotter, Booming Games’ Director of Product, said: “Join Booming Games on the battlefield as Gladiator Arena is unleashed. This 5×3, 20 line, medium volatility slot is sure to be a blockbuster with all of your players. Players can really develop their own tactics for how to maximize their profits in the Battle feature, with 3 different payouts available for each opponent ranging from 15x to 1000x.”

Booming is one of the leading developers of quality slot games and other gaming content for the iGaming industry. The company has established a solid presence in numerous key European markets. It cooperates with some of the top tier operators in the industry, making their portfolio available to users from all over.