Booming Games' Disco Bar 7s to Get Your Foot Tapping 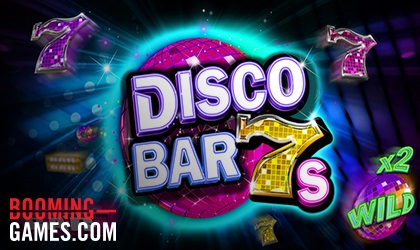 Software developer Booming Games, has been busy as of late, creating a new disco-themed title for your pleasure. Disco Bar 7’s is a modern online slot that features a retro theme and iconic symbols from yesteryear, but you’ll also find some modern features hiding within the symbols on the reels…

…With 3 reels and 10 win lines, Disco Bar 7’s will transport you back in time, to an era when flares, hair as big as your boots and neon colours were prominent features. Situated on the dance floor in some swanky 1970’s venue, is where the reels of the game are placed.

Each of the reels is three symbols high, so on any spin, there will be a total of 9 symbols in view. Colourful disco balls, game logos, iconic 7’s in yellow, purple and pink, plus single, double and triple bars make can be found upon the reels of this video slot.

The aim of the game is simple; adjust your bet to suit your budget (from 10p to a high roller £500 a spin) and wait for those sparkling symbols to fall into place. In a style very similar to traditional fruit machines, this one has no bonus feature, instead it relies on base game wins with wilds, scatters and multipliers thrown in for good measure…

…The disco balls are wild symbols and when three of a kind fall into place, a win of 500 coins will be triggered. The symbol to keep an eye on is the game logo: this is the one that pays the highest;

Disco Bar 7’s is a simple one to grasp and can trigger big wins. Look out for it landing at online casinos, beginning today, 28th August!