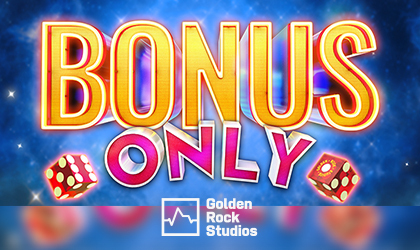 Golden Rock Studios is a relatively young development studio that is quickly making a name for itself in the industry. The studio's latest release, Bonus Only, is a unique and innovative game that offers players a new gaming experience. Unlike most games, there are no pay symbols in this game. The base game is solely focused on triggering the game's various features.

Wins Come Only with Bonuses:

Everyone loves a good bonus, and that's exactly what you'll get with Bonus Only. This exciting slot game features 3 reels and 3 rows of action, with plenty of chances to win big. The maximum jackpot is 1,750x your bet, so there's plenty of incentive to keep playing. You can start spinning for as little as $0.09 per spin or go all out with $180 per spin - it's up to you! It has an RTP of 96.21%. To generate a win, you must activate game features and there are 4 special symbols: Vegas, Macau, Monte Carlo, and Dices. There is also a special board game, multipliers, and wilds.

With its unique concept and exciting gameplay, this title is sure to become one of Golden Rock Studio's most popular games!

Golden Rock Studios Founder & Chief Product Officer, Will Mathieson said With its unique concept and exciting gameplay, Bonus Only is sure to become one of Golden Rock Studio's most popular games, adding: “Bonus Only is the first of its kind with no base game payouts with all the RTP going into the three bonus rounds. This means we can give players a great hit rate of 1 in 15 spins to trigger a feature. We are really excited about Bonus Only as a slot that appeals to a wide reaching demographic from low to high rollers and new to professional slot players.”

In January 2018, Golden Rock Studios was launched by James Curwen and William Mathieson. Both Curwen and Mathieson have extensive experience in the betting industry. The company has since released several high-quality slots, thanks to the talent and industry knowledge of its small team of creatives. It has so far developed more than 20 titles including All About Christmas, Bar Slot, and Wild Predators, and more. The studio is quickly making a name for itself in the world of online gaming, and it looks poised to become a major player in the years to come. Thanks to the vision and expertise of its founders, it is well on its way to becoming a top-tier casino game developer.