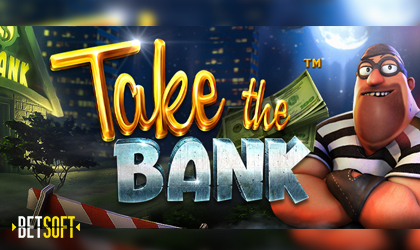 Betsoft, an award-winning software developer working in the iGaming industry, has announced the release of a new slot game titled Take the Bank. As its name gives away, this game…

…is all about pulling the perfect Heist. Players who decide to go on this adventure will run into explosive features and innovative mechanics that can prove to be rather lucrative.

The brand’s latest and greatest slot release puts players in the middle of a heist. With police breathing down your neck, will you be quick enough to…

…break into the vault before it’s too late? The studio behind this release invested a lot of effort into the visual side of this slot. Using a semi cartoonish style, the creative team has brought that classic depiction of bank robbers to the reels.

The scene is a familiar one to anyone who has ever watched a bank heist movie. You’ve got the bank, the streets, and the city skyline towering over it all. The only things missing are police emergency lights, but those are available on the reels.

Speaking of which, the symbol design is interesting to say the least. The title features card royals for the lower paying set while higher paying deck includes all kinds of bank heist related things. There are police cars, crowbars, vaults and much more. It is worth mentioning that some of these are animated as well.

As far as the base game goes, this game is rooted in a 5x4 grid layout that runs on 75 fixed paylines. The core game alone is enough to get the blood moving for most players out there.

However, things get much better once you factor in the special features. Namely, players get to experience the progressive Master Bomb feature. Every 10 spins, all robber symbols turn into bomb symbols.

After an additional 10 spins, all bomb symbols explode and turn into wilds. Additionally, there’s the bonus spin mode as well as the option that allows players to buy bonus spins. Players can also choose to Double Up their win and gamble it in a classic coin spin mini-game.

Annamaria Anastasi, Marketing Director at Betsoft, commented on the release: “We are renowned for developing games that create player engagement and retention and this has recently seen us win several landmark iGaming awards. Take the Bank is our latest big action release and we are expecting a big response from players.”

Betsoft Gaming is a software provider specialized in creating and producing cinematic slot games for the iGaming market. The company currently offers some 190 RNG games in their portfolio and works with over 200 casino operators. It has a solid presence in 15 different regulated markets around the world where their games have proven to be quite popular among the local users.