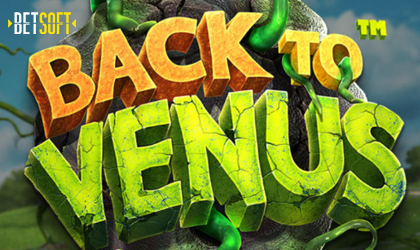 Betsoft, one of the leading software providers in the iGaming industry, has announced the release of a brand-new slot game that promises to bring loads of fun to those who are into science fiction, UFOs, and more!

The game also comes featuring a few interesting game mechanics that might prove lucrative for the lucky ones.

The developer has gone deep into UFO lore with the release of Back to Venus. The team behind this game has taken all of the pop culture references and put them together to form one of the best looking games to hit the shelves so far this year.

The theme combines spaceships, UFOs, crop circles, and mutated plants that are looking for an easy snack. Those who like games with high-end graphics will absolutely fall in love with this new title and its wacky characters.

Speaking of which, the symbols in this game are all over the place. The lower paying ones feature cards royals while the higher paying ones come in the form of UFOs abducting cows, Crop circles, farmer astronauts, and mutated plants.

Even though the background image is static, the hungry plant on the left of the reels is fully animated and so is just about everything that goes on the reels.

The new release runs on a 5x3 reel grid and 20 fixed paylines. As far as special features go, the brand went with a bonus spin mode and several different features that involve wilds.

…as well as Prickly Sticky and Respin game mode. Annamaria Anastasi, Marketing Director of Betsoft Gaming, offered her take on the release: “We are always looking for differentiation without compromise within the marketplace. Back to Venus fits this bill as it includes classic Betsoft content with some fantastic innovations and new features. It follows our ‘sequel’ strategy of keeping the best stories fresh but adding in winning features to challenge gameplay. Based on current feedback, we anticipate an enthusiastic reception from our players.”

Betsoft is one of the leading slot game studios in the iGaming industry. The company has been around since 2006 when it was founded by a group of industry veterans who wanted to add something new to the market. Where the supplier stands out is the use of high-quality 3D graphics in its games.

The team behind this company understands what the players want and has shown a capability to meet their user’s needs. Present in both Europe and the Americas, the brand is slowly growing to become an authority in the industry.