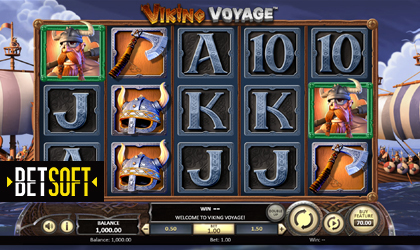 Each game is an adventure in itself, but this one, freshly unleashed by BetSoft is a true treat for everyone who is looking for an entertaining escapade during which several places and features can be explored.

The game has an inviting title: Viking Voyage. It tells the story of a restless Golden King who is determined to fulfil the soothsayers’ prophecy and uncover valuable wealth, all that with the help of his equally purposeful and courageous warriors.

The base game gives us a glimpse of how these men prepared themselves for this exciting journey, while two thrilling features bring players on board the longboats as they start their sea adventure.

Almighty Golden King can be seen on reels one to four and he serves as a replacement to any other icon. Unlike in many other video slots, it will even substitute for the scatter icon.

What Does The King Do?

When The King stands proud at the prow of his longboat, he appears in full-height stacks. Players will see him often utilizing his booming battle cry to stop on a reel, while others will keep on spinning.

Since he is very loud, his scream will be heard across the frozen fjords, meaning that it could potentially blast-off more respins and add more valuable prizes to their virtual chest. The title is equipped with various well-executed characters, such as runes, sigils and other characters that represent good fortune.

Horned helmets, axes, golden goblets and magical guardians that come in the shape of Odin’s ravens can all be seen on the paytable. Besides them, users will come across other valuable raiders that belong to the king, such as a grizzled elder in furs, two fighters, and a shieldmaiden. BetSoft really did their best to develop a game with a cutting-edge design.

Much More To Come…

Perhaps the most interesting feature in this game is the slot spins feature, tied to two longboat characters that can be seen on reels one and five. Once one of them is spotted, the soundscape is changed which means that users must wait for the second icon to appear.

Once both are seen, raiders set sail and the longboats slip into the water and start searching for loot over the course of fifteen casino spins. Annamaria Anastasi, the brand’s Marketing Director, commented:

“Viking Voyage offers players a deeper, more meaningful experience to other games with similar themes. From the artwork to the gameplay mechanics, every aspect of Viking Voyage is steeped in Scandinavian lore and supported by the standard of cinematic gameplay that is unique to the best games in Betsoft’s SLOTS3TM series. Every symbol tells a story, and both the free spins and stacked wild respin features are tied closely to the narrative of the game. We are confident that Viking fans and seasoned slots players will all find this voyage an exciting one to undertake.”