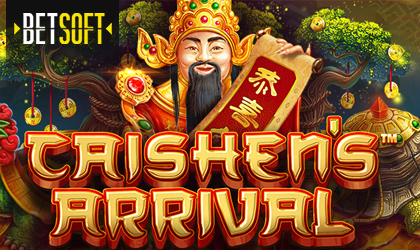 Betsoft’s latest offering titled, Caishen’s Arrival, is set to bring a number of potentially lucrative features that are bound to attract all kinds of players. The company has…

…rightly based the slot around the Chinese God of Wealth as it has the potential to possibly change someone’s life with its incredible multipliers.

Riches from the Far East:

Betsoft has been developing a whole line of slot games dedicated to Asian markets. The release marks the second installment in the series and features a familiar character from Chinese mythology.

Caishen is known as a God of Wealth, who brings fortunes to those in need. Having such a character at the center of their slot makes even more sense considering the staggering multipliers players can potentially win.

As far as graphics go, this slot doesn’t try to win players over with its graphics. Compared to most other games who run a similar, far east theme, this one is quite tame and limited to a red velvet background. However, such designs are common in Asian markets, for which this slot game was initially developed.

The game features a standard 5x3 reel design that runs on 25 paylines. As far as special features go, it offers one of the developer’s most popular options – the double-up game. This brand is one of the few companies that offer what is essentially a coin toss game almost as standard. The company has achieved a decent amount of success with this feature, considering that it has a massive potential to increase one’s win.

As a matter of fact, it claims a max potential win of x35000 the original bet. That is definitely one of the largest possible bet win multipliers this company offers. Aside from this feature, players will also be able to enjoy the bonus spin mode and more.

Annamaria Anastasi, Marketing Director, Betsoft, offered a brief comment regarding the new release: “Caishen’s Arrival is a brilliant addition to our online offering and Red Dragon series. With a sky-high multiplier and plenty of pay-lines, players venture into a land of riches beyond expectation.”

Betsoft is a content provider specialized in delivering cinematic casino and gaming solutions to the market. With headquarters in Malta, this company offers some 190 RNG titles that have brought this company a number of awards in the past. Betsoft’s dedication to excellence has allowed them to grow a massive network of distributors who operate in some of the most competitive markets around the world.

The company currently works with over 200 partners in 15 different countries. It also offers a selection of tools aimed at improving their client’s profitability through various content and user management solutions. The team behind this brand is dedicated to improving the overall player experience through engaging content and innovative technologies. Their games are also optimized to run on different platforms thanks to the use of HTML5.