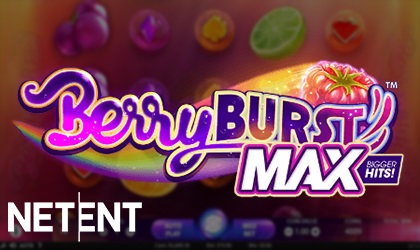 NetEnt was founded in 1996 and in less than three decades, the gaming company has devised an award-winning catalogue of slots, that feature every type of genre you could imagine. From modern 5-reel slots with plenty of bonus features to classic 3-reel slots with just the 1-win line - it’s safe to say, the provider is one of the best to ever to exist…

…We’ve already reported on the brand’s latest introduction of its Max-lineup, consisting of two titles per game release- one for casual gamers and another for high rollers.

The first of its kind to go live on August 23rd is Berry Burst Max. This fruitfully good slot machine bears 3D Fruit symbols and mouth-watering bonus features, which can be enjoyed from 10p to a high roller £200 a spin.

Get Your Five a Day:

Berry Burst Max is a 5-reel slot with no paylines, instead, it features cluster pays. The symbols you will find floating around the reels are: raspberries, orange segments, blueberries, limes and card patterns: hearts, spades and diamonds. A symbol is part of a cluster if it’s horizontally or vertically adjacent to the same symbol.

When six or more wilds (the orange ice cubes) form a cluster, they will substitute for the symbols on either side of that cluster. Wild symbols can appear anywhere on the reels during the base game and the re-spin feature and to get your hands on that re-spin feature, all you need to do is spin in a wild symbol, watch it expand to fill that reel and trigger a re-spin at the same time…

…The big jackpot win of up to 6,000x your stake, will come with a slot machine full of the same symbol: the highest payout in this slot comes from the raspberries – a cluster of 15 symbols will award the top prize.

Do you have what it takes to trigger big wins? Good luck!