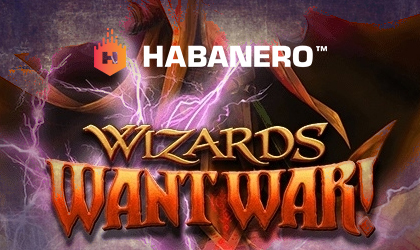 Habanero, a premier producer of slot games as well as table games, has released a brand-new title that brings exciting…

…core mechanics and an even more exciting theme. The game is all about the thrill of the spin and the potential duel players can trigger.

The Battle of Mages:

The latest creation from Habanero definitely brings a unique theme design that will keep players well occupied and entertained. The features great graphics that span from the background image to the animated wizards duking it out in magic duels. The overall look this slot delivers is dark, ominous and quite mysterious. However, that is exactly…

…what you would expect from a Wizard’s den. The developer went with discrete animations for the reels and symbols. Speaking of which, symbols come in two different pay grades – the lower-paying set depicted by card royals, and the higher paying set depicted by various artifacts a wizard might own.

The scatter symbols come in the form of two wizards. Once the symbols land in columns 1 and 5, the game goes into Duel mode where two wizards duke it out in a battle of spells and skill. This also happens to be the main special feature of this slot.

The duel mode can yield up to 9x the original bet through various multipliers. Additionally, at the beginning of each duel, the game will draw a specific wild combination. Rules of the duel game imply that the first wizard to score three hits is the winner. Players will also be able to unlock bonus spins if certain symbols are drawn.

As far as the base game goes, this is a 5x3 reel setup that runs on 25 fixed paylines.

Toni Karapetrov, Head of Corporate Communications at Habanero, added his comment regarding the new title: “There’s nothing more magical than big wins and players can achieve them with our latest release, Wizards Want War! Featuring a virtuous and a villainous wizard, players can watch the two go head-to-head in spell-binding fashion thanks to immersive graphics and sounds. It’s sure to prove popular.”

Habanero Systems is a premier provider of iGaming content that is available across 16 different markets. This company is specialized in designing and producing high-end slot titles of the Western and Asian variety. The prominent feature that all of their games share is the impeccable attention to detail as well as quality graphics.

The supplier currently offers a portfolio of over 100 games that are available in over 28 languages, any currency including crypto. As such, this brand has developed a strong portfolio of core partners. This list includes some of the top performing operators in the world. With such a large coverage and wide spectrum of games they offer, Habanero is constantly on the cutting edge of technological advances when it comes to slots.