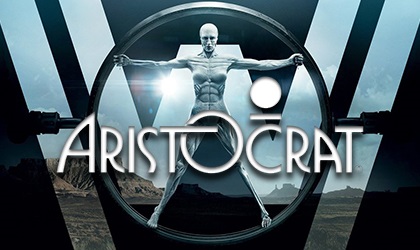 A popular provider, that operates in approximately ninety countries across the globe, Aristocrat is about to blast-off a game that is based on the famous sci-fi TV Show, “Westworld.”

More About the Story:

For those of you who are not familiar with this show, the entire story is set in the near future when our world looks much more advanced and upgraded in comparison with the present. It is a place where reimagined past and future collide.

Fans of Westworld and the ones who are looking forward to playing this game, will be thrilled to know that it comes with a top-notch design and graphics!

The Australian company is going to take you on an unforgettable journey through Delos Lab and Westworld where you will able to experience things you haven’t experienced before!

This video slot abounds with surprising twists and turns, breathtaking scenery, their favorite characters, most memorable scenes and of course, spectacular soundtrack. All these audio and visual elements will make you feel like you literally entered this TV show.

What Can Players Expect?

There still isn’t much information regarding this slot machine. The only thing they’ve guaranteed from this company is an incredible gaming experience in which users will be allowed to entertain themselves in two completely different worlds.

The top symbol is showcasing the Delos world, while the bottom icon represents the Westworld park theme. Furthermore, gamblers can make a minimum wager of 50c if they want to play those games separately.

On the other hand, if they invest at least 80c, they will assimilate these worlds which will instantly become even more enticing and thrilling!

Moreover, this integration will enhance the chances of receiving more money and will give you the opportunity to potentially blast-off a feature. One of the things that we haven’t seen anywhere else is a special math model, that was a complete stranger (up until now) to this gaming industry.

Recently, Aristocrat Leisure talked about the problem they had when their shares had a huge fall due to their poker machine maker. It failed to impress and meet the market expectations. As far as this year is concerned, that was probably their biggest failure!

On the other hand, Aristocrat chief executive, Trevor Croker made a rather optimistic statement regarding their company:

Recurring revenue, including [from] gaming operations and digital social casino, accounted for 65 per cent of group revenues, up from 52 per cent the prior year. This highlights the progress Aristocrat has made in delivering sustainable earnings and cash flow growth over time.”