2BY2 Gaming Goes Explosive with the Release of Wild Krakatoa 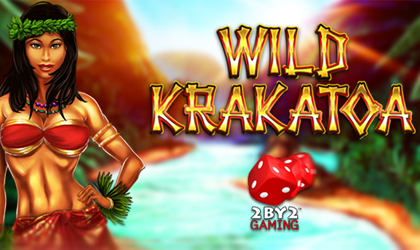 2BY2 Gaming has just announced an explosive slot game titled Wild Krakatoa. The game brings potentially rewarding features as well as a theme that adds a lot towards the overall feel of this adventure.

At the end of the day, the title boasts an impressive package.

This latest slot game is packing a lot of heat.

The game features a colorful theme that puts players…

…on gorgeous pacific island. The location of the reels is hidden deep inside the local jungle with an abundance of foliage on either side of the reels. However, that feeling of safety is only superficial!

Players who are lucky enough to draw the Wild symbol across the middle reel will activate one of this game’s unique feature that turns the otherwise peaceful scene into fiery chaos as Krakatoa erupts in the background.

Speaking of symbols, the developer went with a proven setup. The lower paying tier of symbols depicts the all too familiar card royals while the higher paying set depicts several people from the island, exotic flowers and more.

It’s worth adding that the sound design is also on point, adding a whole new dimension to an already fantastic slot game.

The 5x3 title runs on 30 fixed paylines. It offers an estimated RTP value of 96.032% and is well within the highly volatile category of slots. As far as special features go, there are several to choose from.

…look forward to the Expanding Wild respins mode that is triggered when three Krakatoa wilds land on the middle reel. As you’ve probably guessed it by now, that is exactly when the volcano goes boom and triggers the respin feature.

During this mode, the center reel turns into a static wild that remains in place for the duration of this game mode. Then there is the standard game mode triggered when 3 scatters the reels.

2BY2 Gaming is one of the leading software studios from the United States. Located in the Chicago area, this company has been making high-quality slot games for decades. Its team has over 125 years of cumulative experience to offer, with 65 issued patents and 35 pending patent applications. Needless to say, this company takes innovation very seriously, making it a centerpiece in its business policy.

Over the years, it has accumulated a respectable portfolio of partners from all over the world. This company is working with both online and land-based casinos where they are having plenty of success.