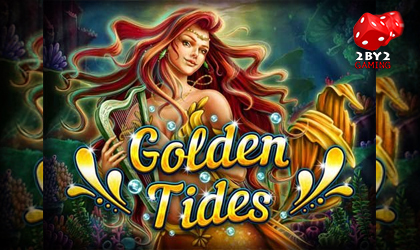 …puts players in the company of mermaids, pearls and beautiful corals.

2BY2 Gaming’s latest creation takes the underwater theme to a whole new level. The team behind this title has attempted to maximize player immersion by designing a theme that boats great attention to detail.

Players will be treated with vivid colors and immersive graphics. 2BY2 has also added animations to the game, thus giving players the impression that they are underwater with the reels. One such design detail are the bubbles that rise from the bottom of the screen, indicating that someone or something is breathing just underneath the screen.

This slot uses the standard scatter and wild symbols that trigger different features.

Core game mechanics are based on a 5x4 grid that runs on 40 paylines. Special features include an extra spin mode as well as the Golden Mermaid that offers various multipliers…

…that can stack up to 30x the original stake per payline.

The estimated RTP for this game is set at 96.04% while the game itself is considered to be fairly volatile. That will undoubtedly attract players who prefer the more thrilling gaming experience. With that said…

…the latest title is still an extremely fun game to play.

The game was announced by 2BY2 Gaming on August 13 and is officially live for real money play. Players will be able to enjoy this title in all affiliated online casinos post-release.

2BY2 Gaming is a software provider based in Chicago, Illinois. The company is specialized in delivering niche iGaming solutions to their partners using multiple channels. Their games are known for being based on unique math models that are attractive to a wide range of players. The company currently holds over 65 patents and has 35 more which are pending. With a team consisting of industry veterans, 2BY2 is operating on an estimated 125 years of industry experience.

Their practical know-how, ability to recognize emerging trends and a knack for unique game mechanics have allowed this company to build a massive network of clients. Their games are available in numerous markets around the world.

The company is also known for its land-based solutions that share the same level of quality and as their online selection.

Game creation is just a part of its services. This company also offers custom game development as well as game conversion services. With that said, game licensing still represents a decent chunk of their work.

It takes pride in its consulting services. Their team is eager to help all kinds of businesses, big or small.