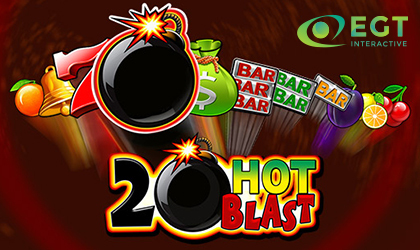 We have finally said goodbye to winter and now it is a perfect moment to welcome the season that brings more vivid, vibrant colors and a cheerful mood.

That’s how we would describe this latest slot machine, designed by EGT Interactive.

It is titled, 20 Hot Blast, and on the surface it may look simple and ordinary but it is actually quite diverting.

How did this game get its name? Well, EGT wanted to develop a fun slot that is at the same time filled with interesting features and brings a large blast 'o winnings.

Sometimes things can be simple and still manage to blow people away with their awesomeness and that’s the case with this one.

This slot machine comes with five reels, twenty fixed lines and several classic symbols we’ve all gotten an opportunity to see in other games, such as fruit, scatters (Pouch), BARs. All these characters are going to help players hit great wins.

As usual, the wild icon is a perfect sidekick during gameplay and in this case it expands on all positions on its reel and serves as a replacement for all other characters except for the scatter.

One of the most appealing parts of the the new game is the Multiplier Feature, a feature we don’t get to see quite often. It comes with TOPPLING REELS.

During every base game, after winning combinations are spotted on the screen, all rewards are paid and all winning characters vanish.

Reel positions that are blank will slowly be filled with all the signs that are placed above them and all brand-new combinations are paid.

Furthermore, this thrilling TOPPLING REELS FEATURE continues to be active until no winning combinations are created on the screen. A four levels of Mystery Jackpot is also part of this game. It’s worth mentioning that this game can be played on both mobile and desktop devices.

Although they are generally one of the most popular providers in the industry, it doesn’t hurt to give more information about them.

All their knowledge and expertise they brought from various EGT land-based casino games into the world of online slots.

They have merged both original looks along with functionality of some of the most popular casino games in order to provide players with a unique and spectacular gaming experience. Even though they have already established themselves, they are continuously working on offering top-quality games and services to their partners and gamers.