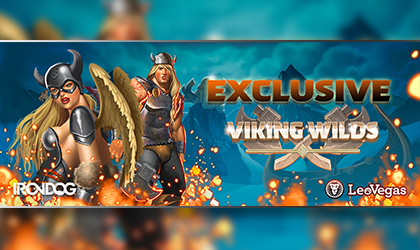 A few days ago, it was announced that 1x2 Network is going to release a brand-new video slot, Viking Wilds, with an initial launch exclusively for LeoVegas. Those of you who are eager to play, it’s worth mentioning that it will be available on 6th March but only to players of this online casino.

Furthermore, those who aren’t, will have to wait for 27th March when this game will become accessible to the rest of the world.

Scandinavia At Its Best:

Nordic countries are always a good idea if you want to create a wonderful yet cold atmosphere where exciting things can happen. Filled with beautiful sights as well as fjords, it is not going to leave you indifferent.

As we stated in the beginning it was developed by Iron Dog subsidiary, 1X2 Network.

Those who decided to play this game will get to meet the Valkyrie Winged Warrior or the Viking Berserker which represent your guides.

They are brave and fierce and will help you grab plethora of wilds and tumbles, as well as casino spins!

One of the things that must be mentioned is the phenomenal graphics and sensational animations mixed with complex mechanics and math.

All these segments combined make one hell of a game that are perfect for an exciting player experience!

If you want to make the most out of this game, then you have to make sure you grab three different ‘key’ wilds that will appear during the base game. If you do that, you will be showered with the extra spins bonus!

If you successfully collect them, you will open up the doors of Valhalla where slot spins are awarded!

Furthermore, this fun slot comes with expanding reels which can help you get more ways to wine, starting from 1,024 during the base game and go up to 3,125.

The premiere of this game will be at ICE London, at stand, N4-245. Kevin Reid, Chief Commercial Office at 1X2 Network stated:

“Viking Wilds is the most impressive Iron Dog Studio launch to date and we are thrilled to be offering it to LeoVegas players exclusively for the first few weeks.

There has been a tremendous amount of work put into the design of the game, which we have combined with a range of features that ramp up the anticipation and excitement for players.”

“Iron Dog Studio have shown great potential since we welcomed them onto our network. This makes the news of having their first release of the year as an exclusive all the more exciting!”