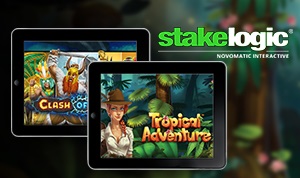 Stakelogic is going into the New Year with a bang, with the release of a series of new slot titles. The brand will launch quite a few slot games in the near future, and players should be pretty excited to check them out.

For starters, professional Darts legends are transformed into superheroes with spectacular powers in DartsHeroes. The 3D game is made up of 5 reels, and 243 ways to win. Four darts players are featured, and include Phil Taylor, Raymond van Barneveld, Michael van Gerwen, and Gary Anderson.

Each of the players takes on a superhero persona, with his own distinct power, and all have wild capabilities.  Most can expand to cover random reel positions, and each of the wilds can also trigger a series of free spins.

Another new title from the brand is Midnight Rush. It takes on a theme more appropriate for the Halloween season, as the reels are set in front of a cemetery scene, and all kinds of nightmarish creatures parade the screen. It offers 5 reels, and 9 paylines, and boasts features such as multipliers, stacked wilds, and an exciting ‘Click Me’ feature.

Next up is Cash & Camels. This is an Egyptian-inspired slot, which uses the brand’s innovative 360° technology. The reels display a desert landscape, with iconic Egyptian pyramids appearing in the distance. When it comes to bonus features, free spins, multipliers, spinning wilds, and more are up for grabs.

Stakelogic will also go live with Bank or Prank. Players will be immersed into a full-fledge heist, in which there are expensive valuables to be obtained. The catch? They are well secured in high-security vaults. Gamers will have the opportunity to collect mini symbols along the reels, as well as decide whether or not to take the bank manager’s offer of a mystery reward. It is also equipped with a lucrative Joker’s Crazy Wild game.

Keep an eye out for these latest slots from the brand, as they are scheduled for release in the very near future!

Get your Fruit Fix with Multi Joker Popwins Slot Game

Try out three new slots from Stakelogic at VideoSlots.com