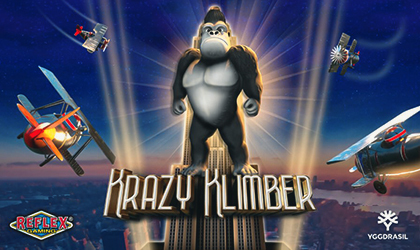 Reflex Gaming with Yggdrasil have officially released the Krazy Klimber slot. The game is themed on a massive gorilla that climbs to the top of buildings somewhere in New York. Players are invited to join the adventure, in which the main symbol is the gorillas, aka the wild. There are also lower paying symbols such as 10, J, Q, K and A, as well as higher paying symbols such as skull island, cameras, a blonde woman, planes, and a huge building.

The title is the developer’s latest game which is part of the YG Masters program since it launched Desperate Dawgs, which has surpassed all expectations, and has been one of the most successful this year!

Stuart McCarthy, Yggdrasil’s Head of Product and Programs, said: “Krazy Klimber sees another action-packed slot added to the YG Masters portfolio by Reflex Gaming. With an instantly recognisable theme and huge win potential through the Krazy Klimber feature, we can’t wait to see how the game is received by players across our operator network.”

Mat Ingram, Chief Product Officer at Reflex Gaming, said: “We’re thrilled to launch Krazy Klimber through the YG Masters program as it has been one of our strongest games on our land-based machine estates."

About the Casino Provider:

Yggdrasil Gaming is a casino provider focused on creating amazing games for online casino operators. The brand has contributed significantly to the growth of the slot industry by developing innovative and cutting-edge slots. It started its business in 2013 and has supplied gaming products to some of the world's leading online casino operators. The company has received several awards, and in 2018, it received the EGR B2B award for its innovation, and in 2017, it was named slot machine supplier of the year and in the same year, the brand received the Innovator of the Year award.