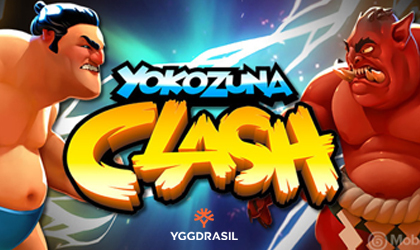 Yggdrasil fires up the reels with another action-packed slot titled, Yokozuna Clash. The game puts players in the very center of Tokyo’s most popular Dohyo – a busy arena where…

…sumo wrestlers come to practice this ancient martial art. There, players will fight against opponents to claim the title of a sumo champion, or Yokozuna.

A Different Kind of Gaming Experience:

The latest slot release from Yggdrasil pushes the limits of immersion with impressive graphics. The team behind the game has invested a massive amount of time and effort into creating visuals that transcend everything but only a handful of top tier titles have to offer.

The scene takes place inside a Dohyo. The foreground and background depict a silent but tense audience while two sumo wrestlers size each other out in the center.

What makes this slot stand out is the fact that the audience is moving the entire time and so are the wrestlers themselves. All characters in-game also react to and other events.

With all that said, the reels are squeezed somewhere in between the audience and the wrestlers, serving as a backdrop to this awesome match of skills.

The game runs on a 5x3 grid and utilizes a 243-ways-to-win mechanic. Players can set the coin value anywhere from 0,004 to 5 credits, which makes this game suitable for all kinds of players. Additionally, the game features an estimated RTP of 96.3%.

The supplier has also included a number of special features to further spice up this already impressive title. The game offers a bonus spin mini-game triggered when 2 bonus spin symbols area warded during base game spins. Once triggered, the bonus spin mode starts a fight between the two sumo wrestlers. Winning from…

…left to right makes the player’s fighter attack the enemy while winning from right to left favors the opponent. There are four tiers of fighters while beating all of them triggers the final boss fight.

Natalya Ovchinnikova, Product Owner Slots at the brand, offered a comment regarding this release: “Yokozuna Clash has unique game mechanics that bring together the action-packed fighting element common in video games with our innovative slots features in a highly intuitive way. The game has a lot of incredible features in store and easily triggered Free Spin rounds. In Free Spin mode, the wrestlers reflect the happenings on the reels, adding more wilds or multipliers depending on the course of action. If players succeed in defeating the Yokozuna, the tournament is won, and players’ wins are doubled.’’

Yggdrasil is a Swedish-based software provider specialized in delivering high-end games to B2B clients operating in various regulated markets around the world. Founded in 2013, the company quickly rose through the ranks and became one of the authority figures in the industry. At the moment, this software provider enjoys licenses from Malta, the United Kingdom as well as Gibraltar and Romania.