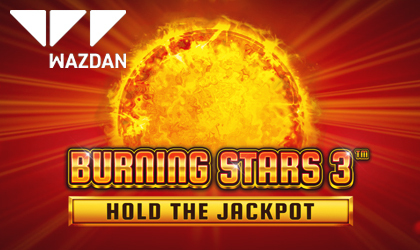 Wazdan, an innovative software developer, has launched an exciting new hit: Burning Stars 3. The game comes after the recently launched Clover Lady and has 3 reels and 3 rows with 9 active paylines and an RTP of 96.15%, which is around the average. During the main game, the wild symbol replaces all others, except in the bonus round.

The title is packed with the Hold the Jackpot bonus round, which is activated when at least 3 or more bonus symbols appear in a single round. When using the Hold the Jackpot mechanic, all bonus symbols remain attached to the reels during a spin, and re-spins will reset if a new bonus symbol appears on the reels. The session goes until all 9 reels are filled or the count reaches zero. With more bonus symbols, the reward counter will increase from 3x the bet up to 2187x the bet, if players find all 9 and hit the Grand jackpot. This game has features that are already popular among the brand’s players such as big-screen mode, ultra-fast, and ultra-lite mode.

The proven and very popular Hold the Jackpot feature is available for players, which is activated with a buy feature and increases chances of generating big wins!

Wazdan is an online slot developer which is focused on developing various slots. Its titles have an elegant design that is part of its many popular games. The company has been active in the industry for over a decade and some of its best work includes popular titles such as Book of Magic, Larry the Leprechaun, Captain Shark, Butterfly Lovers, American Poker V, and many more. The provider pays special attention to the development of games that always have great designs. This is what ensures their uniqueness. Its work has been noticed and the brand’s name appeared at game awards, and more importantly, it continues to develop and produce great titles.