Wazdan is Continuing to Expand Their Portfolio with High Quality Titles 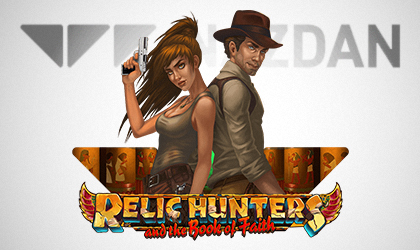 Wazdan’s brand-new title, Relic Hunters and The Book of Faith, promises to be the crown jewel of this year’s offer. Speaking of which, this software studio has been releasing numerous titles this year, all of which have achieved a decent level of success.

Relic Hunters brings the user on a great adventure that involves pyramids, sarcophagi, scarabs, and so much more awesome stuff! This studio has been having an exciting year so far, to say the least. They have released a number of highly successful games in a very short period of time.

If you are a fan of Indiana Jones, you’ll absolutely love this slot game. Set in in Egypt, the game brings a unique vibe with backgrounds that follow the storyline, awesome symbol design and overall theme that simply fits.

Wazdan is known for delivering detailed graphical solutions in their games, especially the ones they have released these last few months.

As far as game mechanics go, there is a lot of interesting stuff to be seen in this title. For starters, this is a 6-reel game that utilizes 20 paylines. Much like other releases from this software studio, this title also comes with a number of interesting special features. Depending on your luck, you can get 10 extra spins, an Expanding Bonus Symbol and more. The title offers high levels of entertainment for sure.

Andrzej Hyla, Head of Sales over at Wazdan, offered his comment on the release:

"Relic Hunters™ and the Book of Faith is a game we are incredibly excited to see go live. After much work from our team, we are proud to see the game in action, with great responses so far from players at Kindred owned casinos. It has been a big year for Wazdan as we have launched numerous games and announced significant partnerships. We are humbled with our success to date and look forward to delivering more feature and tech-rich games to our operators and players for a long time to come."

The game is currently available exclusively through Kindred Group operators and their respective online casinos.

The developer is a company that has been creating custom-made software solutions for over 10 years. The team behind this name is known for their games like the ones we have talked about today, but also for their server-side solutions. With all that experience and knowledge regarding all aspects of online casino games, it has proven to be one of the most innovative entities in the industry.

Because of this, they have established a number of strategic partnerships that opened up new markets and user pools to this growing company. With such a successful Q4 of 2019, we are most likely going to hear about this studio a lot more next year. Especially if they keep releasing quality titles like Relic Hunters and The Book of Faith.