Wazdan Goes for a Space Adventure in Reel Hero Slot 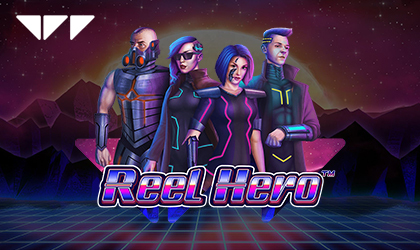 Wazdan is bringing a space adventure to the fans worldwide with the release of Reel Hero.

The new game is all about a sci-fi…

…experience that promises to potentially bring valuable prizes to those lucky enough to trigger the right features!

The brand’s latest release is a worthy homage to the ‘80s vision of the future. Those who remember the old sci-fi movies and the aesthetic they brought to the silver screen will absolutely have a nostalgic experience playing this new title. The entire game is done to match the vibe. The background brings an outline of digital mountains pressed against a burning star and surrounded by the darkness of space.

The foreground features the iconic neon grid and does a much better job of evoking the void than the background ever could. Overall, the aesthetics of the game are spot on.

The same can be said for the symbol design. Players can look forward to card royals in the lower-paying tier while the higher paying tier features classic symbols designed in a sci-fi style. In other words, diamonds, bells, lucky 7s, and more are there but they look nothing like we’re used to.

Features to Match the Visuals:

The 5x3 slot runs on 20 fixed paylines. The game comes packing several interesting features based on different characters of the game.

…shady figures. Triggering each special feature that matches these characters offers a chance to win unique prizes. Rich Bonus will see any wilds expanded across the entire reels.

Victoria Bonus shifts all symbols one reel to the right, thus allowing new symbols a chance to appear on the reels.

Wazdan is one of the more innovative slot game providers that take great pride in delivering immersive games to its fans worldwide. The company was founded in 2010 and has since brought all kinds new technologies to the industry. On top of that, the supplier is constantly rolling out new and unique features that are making their games much more competitive on the market.

Its team is comprised of highly talented individuals who are all about taking their trade to the next level. Wazdan follows a crowded schedule that is packed with new releases covering the whole year moving forward. Such a positive drive has allowed the brand to establish working relationships with various tier one casino operators from all over the world.