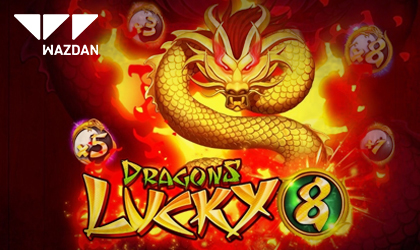 Wazdan has announced the release of a new slot game. Titled Dragons Lucky 8, the new release…

... is bringing a fresh take on the ancient Chinese theme and draws inspiration from traditional Chinese culture.

Familiar Theme with a New Twist:

Ancient Chinese culture and aesthetics have served as inspiration for many slots, including the latest release from Wazdan Games. The studio behind the game has added its own spin that many will find refreshing. Even though they have veered away from using what most other brands use when designing Chinese-themed slots, the supplier has kept the Dragon.

Being one of the most important creatures in Chinese culture and tradition, Dragons are known as harbingers of luck.

Players expecting to find a regular Far East-inspired theme will enjoy the animated background, detailed frame and the overall tranquility that the scene provides. However, as soon as the reels are spun for the first time, players will know that this is no ordinary slot. Instead of using the usual symbols, the brand went with fruits. By doing so, they have added a unique spin to the theme that brings a refreshing change to this segment of the slot industry.

Underneath the graphics lies a solid core game that features a 6x3 grid with 20 paylines. That is another detail that sets it aside from the rest of the segment.

As far as special features go, players will experience the usual extra spin mode with 30 extra spins as well as a Variable Win Multiplier. Those lucky enough to engage the multiplier will potentially reach up to 8x the original bet.

There is also the Ultra-Light mode along with the Energy Saving mode. Designed primarily for mobile users, these modes allow players to save up to 40 percent of battery life and load the game much faster.

Andrzej Hyla, Head of Sales, has offered a comment regarding the new release: “Dragons Lucky 8 is a fun-packed slots game with special features aplenty, in addition to high-class graphics, animation, audio, and navigation. It’s been a busy year for our team, but we have maintained our commitment to regularly releasing new games, ensuring that players and operators continue to see and experience all that Wazdan has to offer. We look forward to more announcements soon.”

The title will be available at all affiliated online casinos.

Wazdan is an innovative software studio that is responsible for a number of highly successful, critically acclaimed titles on the market. The brand has been around for more than 10 years and is constantly on the edge of technological advances. Its unique features give their clients more control over the content as well as the player’s experience.

This company has seen steady growth ever since they have released their first server-based solutions back in 2010.