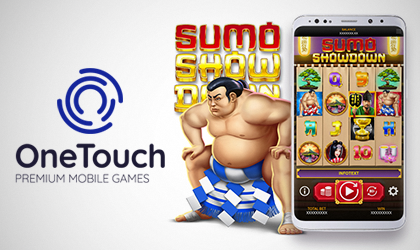 We’ve had the chance to see many interesting and unusual slots with unique diverting themes, but this time one of the most inventive developers of mobile-first games, OneTouch, has outdone themselves by developing a Sumo-inspired title.

Sumo is one of the most popular Japanese sports and it has fans all over the world, therefore, players who are into this sport will definitely enjoy this sensational game. It represents a 4x4 grid game, that consists of 10 pay ways and is the second slot from this inventive company.

Last November, they blasted-off a huge hit, Juicy 7 and according to some reports, it looks like this one is going to follow in the steps of the previous game.

More on the Theme:

Let’s discuss its story. As we stated in the beginning, logically, it revolves around this ancient sport during which players are also spectators who will have the opportunity to see two gigantic guys wrestle.

Also, these boys will help gamers potentially get some huge wins! Beside these two, traditional oriental characters, such as bonsai trees and a panoramic view of Mount Fuji are embedded on the reels.

And That’s Not Nearly Everything…

Probably the most thrilling part of Sumo Showdown is an exciting bonus feature that comes with a respin if the Sumo icon appears on both the first and fourth reels.

All these characters behave like scatter symbols and they do not have to be seen on a pay line in order to unlock any winning spins. Furthermore, random sticky wilds, in the shape of gyoji or Sumo referee can also serve as a replacement on the reels.

“Sumo Showdown is the second slot game in our rapidly expanding portfolio of games content and its elegant design and fun gameplay is sure to be a massive hit with players across a number of key markets.

Featuring easy to understand payways and a straightforward bonus feature, the user-friendly game will appeal to casual players and experienced gamers alike, and we’re delighted to add this slot to our burgeoning portfolio.”

As mentioned before, besides the widely-known Juicy 7, OneTouch prides themselves on having a vast selection of outstanding classic table games such as baccarat, blackjack, Hold’em Poker, Russian Poker and Sic Bo.

All of them are equipped with top-notch graphics, and cutting-edge sounds effects, while at the same time, keeping that classic look players know and love.