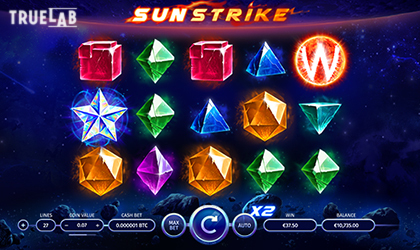 This new game combines a sci-fi theme with…

…a number of potentially lucrative features. The result is an entertaining package that scratches all of the itches.

The company behind Startup Valley and other successful slots, has rolled out what might be another one. The new slot is absolutely one of the best-looking games to hit the market this year so far. The whole action takes place in space. The bottom portion of the screen is packed with asteroids while the top depicts an outline of an active star. The middle?

That part is reserved for…

…the endless void that is space and stars that somewhat illuminate the entire scene. The theme isn’t static. There are animations all over the place which should make the game interesting to those who appreciate the added visuals.

As far as the symbols go, there’s only simplicity. Namely, the supplier has gone with a bunch of crystal looking things instead of the usual two-tiered system.

Each symbol is highly detailed and has a very strong sci-fi feel to it. That being said, those familiar with the standard gem setup often used in slots will feel right at home!

The Simplicity of Space:

One thing that makes this latest release interesting is its streamlined feature set. The team behind this release went all-in on the base game, giving it all kinds of flares.

As a result, players can…

…look forward to random base game features such as multiplier reels where entire reels get a multiplier applied to them. Alternatively, those multipliers might get substituted by flare wilds.

Vasily Polynov, TrueLab’s CBDO, shared a comment regarding the new release: “Normally we like complex gameplays, but Sunstrike’s clarity covers massive prospects. This game stands on truly magnetic math, complete with great visuals. We bet Sunstrike will become an instant fave for a variety of players.”

TrueLab is a prominent software provider that is known for releasing quality slot games for the iGaming industry. The company was founded in 2016 by a group of likeminded professionals who wanted to give the industry their own spin. Since then, it has published several games and announced many more.

This studio is currently working with several top tier operators around the world and is making a name for itself in key regulated markets. The team behind the brand counts 36 members that share decades of cumulative experience.