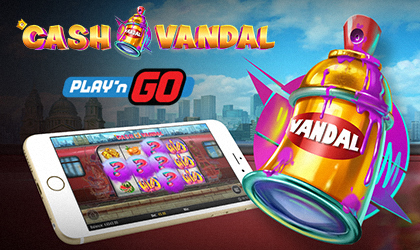 Who doesn’t wish to travel the world and see all those wonderous cities and distant places? We all do but, unfortunately, that is not easily achievable.

Well, we tricked you! Namely, a Swedish-based game developer, Play’n GO found a perfect solution for all of us who haven’t yet become world travelers.

What Are We Talking About?

They just unveiled a slot machine called, Cash Vandal, that enables players to take a trip across Europe and visit some of the most amazing cities in the world, such as Berlin, Paris and London.

They will not only see the most famous attractions but also street art as well as rich culture. This slot comes with four reels and it abounds with superb graphics and design, focusing on showcasing wonderful locations.

Those who are familiar with these metropolises or have visited them will recognize their most famous landmarks.

The City Feature is definitely one of the most thrilling parts of the game. It allows the players to pick their favorite city by hopping a train and choosing the destination they want to explore.

Furthermore, each of these cities comes with a unique feature that users can utilize in order to enhance their chances of receiving more amazing prizes.

What is especially likeable about this game is alternatives people get during gameplay. For instance, the City Feature bestows players with various types of slot spins. Some of them will probably choose when the wilds are being sprayed onto the reels in Berlin, while others will be drawn to the huge reels of Paris.

If none of these suits you, then you can always go for the mystery signs that are embedded to the reels in London.

Furthermore, this game doesn’t have as volatile gameplay as some others, but it still offers a plethora of opportunities to grab some sensational wins in the city of their choice.

Their mission is to continuously provide their consumers with top-notch games, as well as their operators.

In the meantime, they have been certified for various regions and have successfully reached markets in the United Kingdom, Denmark, Italy and Sweden.

What’s important is the fact that they are also certified for Colombia where they already have more than 100 games certified and they are planning on making more of them accessible in this country.

This video slots, as well as many others will be presented at the FDJA tradeshow in Bogota on April 10th and 11th.