Swintt Goes Live with Golden 888 from its Lite Series 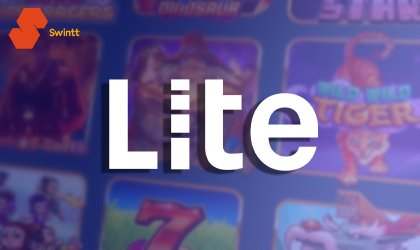 Swintt, one of the latest casinos to join the iGaming industry, has announced the release of a brand-new slot game titled Golden 888.

This new release is…

…a part of Swintt Lite series of slots that are known for being less complex than the usual releases.

When the brand announced its latest title and said it was a classic game, they weren’t kidding. Fans of the vintage one-armed bandit design will absolutely love this title. It is a completely different experience compared to something like Golden Buffalo – another awesome game from the developer.

As far as game design goes, it’s all about the old school land-based machines. As it loads up, players are presented with an actual physical machine, complete with the paytable next to the reel window and a lever on the right side of the machine. The background behind the machine is out of focus but could easily represent a casino.

One cool detail about the theme is the subtle level of animation and other details. When players pull the handle to spin the reels, the lever itself moves. On top of that, if you look closely at the reel window, you’ll see a reflection of what appears to be massive chandeliers.

Symbol design is as classic as they get. The brand went with a selection of BAR symbols of different colors and numbers, while the highest paying standard symbol is a pair of cherries.

As far as features go, the games brings a 3x3 reel grid that runs on 9 fixed paylines. The special features included in this slot are rather limited, which is what the series is all about.

…substitues all symbols and can bring either 3x or 9x multipliers. Other than that, all of the action is reserved for the base game!

David Mann, Business Development Director at Swintt said of the new release: “Golden 888 is a straight-forward classic style slot, designed with certain audiences in mind. Many of our partners are looking to expand their slot portfolio with a variety of games and this provides for players who like a retro style. We’re thrilled to expand our Swintt Lite series with this game as well and make sure we cater for any operators entering emerging markets. Swintt Lite works well alongside our other localized content, including the land-based games in our portfolio.”

Swintt is one of the newest software studios to join the iGaming industry. Despite that, the company has managed to build quite a reputation in a very small timeframe. With a limited but diverse portfolio of games, it is growing into a household name in numerous regulated markets around the world.