Survive Folsom Prison and Get Rich via Nolimit City 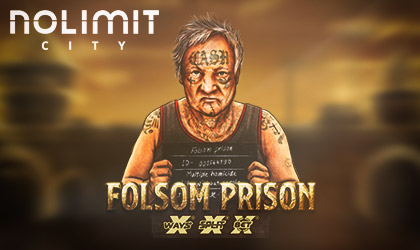 Nolimit City's new Folsom Prison slot transports players to one of the most dangerous prisons in the world. The game is set in the iconic prison of the same name, which has been home to some of the most violent offenders in California since it opened in 1880. Players will have to navigate their way through the prison, avoiding danger at every turn. The developer has proved with its previous San Quentin xWays slot that it can make even the most sinister themes enjoyable to play. So, if you're feeling brave, why not venture into the Folsom Prison and see what treasures you can find?

Featuring an RTP of 96.07% and high volatility, the game offers players the chance to win big. With a maximum win of 75000x the bet, this game is sure to keep players coming back for more. Also, 46,664 betways mean that there are plenty of ways to win. Wager-wise, players can bet between $0.2 and $120, and there are bonus features such as scatters, wilds, multipliers, chair bonus round and a bonus buy feature.

Enter the Danger Zone in The Most Ruthless Prison:

With its exciting gameplay and captivating graphics, this title is sure to be a hit with players looking for an exhilarating gaming experience!

Product Owner at Nolimit City, Per Lindheimer, said: “A Prison that’s become immortal by one of the best albums of all time, was a big inspiration for this title. A San Quentin- light if you prefer, but it’s so much more than just a prequel. Don’t let the old school style make you too comfy, this is a violent place – and a volatile slot.”

Nolimit City is a game provider that has been in the online casino gaming industry for over ten years. It has several interesting games under its name, including Oktoberfest, Owls, Tesla Jolt, and many more. They usually offer a higher RTP, which gives players quite often wins during gaming rounds. This is a very important factor to the punters these days. The provider is originally from Sweden, but its offices are in Malta. It has partnerships deals with several well-known operators, which indicates that its already enjoys a good reputation.