Super Graphics Upside Down Gets UPGRADED! 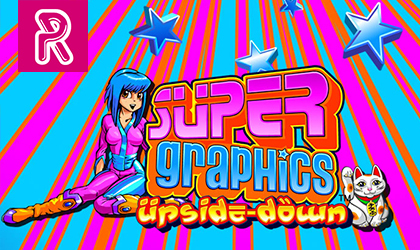 Realistic Games, popular casino content developer has always tried to come up with something new and refreshing.

Those who are familiar with their earlier work probably remember their most popular game called, Super Graphics Upside Down.

What Do We Know About This Slot?

It is an anime-themed game that consists of five reels and it was originally launched eight years ago within a virtual slot cabinet. Their primary goal was to perfectly depict an arcade theme.

Now, they want to freshen it up by incorporating some new and interesting aspects. It was equipped with a casino spins bonus round, as well as with upside-down reels. It almost instantly caught the attention of various players and also became their most popular video slot – to this day, at least.

New Changes On The Horizon:

Meanwhile, the brand has come to the realization that it’s time to modify, and at the same time, ravamp some things by upgrading it to HTML5, giving it a full-screen presentation, as well as enhancing sound effects and visual aspects.

Its main character, Satsuki, looks much trendier and modernized in comparison to the older version. Having been optimized for mobile play, now users can experience gameplay from anywhere at any time.

“Super Graphics is easily our most popular game and what we are renowned for within the industry.

We are delighted to be able to release an even bigger and better version of the game to ensure it remains as fun as ever to play.”

…and now, at some point, they want to create a third game in the series. No one knows exactly when, but sometime soon.

Lee seemed very secretive when he talked about the forthcoming game, still, he did uncover a bit by adding:

“It would be a shame to give too much away at this stage, but I’m happy to reveal that fans of Satsuki and her waving cat can expect more excitement (and free spins) very soon.”

The enhanced version of this video slot came right after launching one of their newest offerings, called, Reel Gambler as well as their modern version of a typical table game, called 3D Roulette. We are looking forward to seeing more from them!