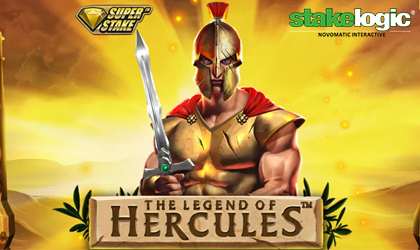 Stakelogic has released a new video slot game titled, The Legend of Hercules. The game brings players a tremendous amount of excitement and leads them in the fight for enticing wins and bonuses.

Heart of the Battle:

The developers took inspiration from the period of ancient Greece, where the main role is played by the legendary hero Hercules, son of God Zeus. The hero is going to take you into the heart of the battle for great potential rewards.

The title is based on a common 5x3 grid with 30 active paylines, which can lead players to a maximum payout of 10000x the bet. The game has an RTP of 95.05%, and it's paired with low to medium volatility with an excellent potential win.

Wager-wise, you will be able to go as low as 0.3 coins and as high as 30 coins on each spin, and with the new super stake bonus feature, you can get a stunning maximum win of $600,000.

There is the Super Stake option and it's the latest slot innovation by developer, which allows players to place a side stake and effectively double the bet.

The feature is all about upgrading the symbols, and it can lead you to upgrade all of the symbols to the highest-paid Wild symbol. It's combined with a Multiplier that rises with every promotion, up to 10x, giving a potential win of 10,000x the bet.

The Extra Spin feature is activated by Scatter symbols when they land only on reels 2, 3, and 4.

Stephan van den Oetelaar, CEO of the provider, said: “The Legend of Hercules ™ takes a classic and popular slot theme and gives it the Stakelogic treatment. This means striking graphics, authentic sound and the most engaging and entertaining gameplay imaginable.“

The Stakelogic team has incredible momentum behind it following a run of hugely successful games and we believe The Legend of Hercules™ will prove to be just as popular as other chart-topping titles launched earlier in the year.”

Stakelogic was founded in 2014 with offices based in Netherland and Malta. The provider is famous for producing 360-degree video slots, which is unique these days and gives players a new perspective and sense of excitement during play. The brand produces the highest quality games with the latest technologies, making games available and fully adaptable on mobile, desktop and tablet devices.