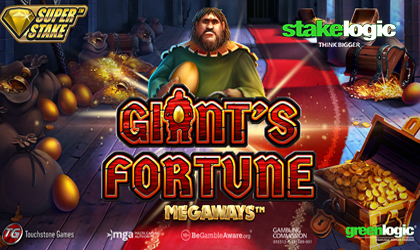 Stakelogic goes live with online slot Giant's Fortune Megaways. This is a fantasy adventure filled with tough boys, castles, treasures, and more. This game mostly uses the Megaways engine with few customizations. Fans will surely love the view presented in Giant's Fortune Megaways as the background is filled with stone bridges, waterfalls, mountains, and castles. Its appropriate soundtrack further adds to the theme.

The game is played on 6 reels, 4 rows, with an option for the grid to expand up to 7 rows. With each spin, the number of symbols changes on each reel, offering a different number of ways to win, up to a maximum of 117649 active paylines. As for bonus features, there is Stakelogic's Super Strike feature to look forward to. Without the feature, the betting range goes from $0.2 up to $20 per spin and when activated, the bonus feature and the amount will double. The RTP is 96%.

Wins with Almost Every Spin:

The game has a vibrant design that Stakelogic is famous for, as well as an original soundtrack that makes players feel like they are indeed playing together with the giant.

Head of Greenlogic at Stakelogic, Salvatore Campione, said: “This is a game of big proportions; the giant theme is underpinned by Big Time Gaming’s MegawaysTM to deliver a huge number of ways to win with every spin. We have also ensured that potentially massive wins are only ever a spin away. This has been achieved by combining a series of features including Wilds, Multipliers and Free Spins as well as our ground-breaking Super StakeTM innovation. Touchstone Games have been amazing partners and launching this slot together is a stepping stone to great things.”

Stakelogic was established in 2015 and is one of the youngest software operators in the industry. The company is known for its 360-degree slots. It managed to launch around 140 casino games, which have become very popular due to its innovative technologies and functions and this brand managed to create all of its games with a unique style. Among its popular titles include the Football Gladiator slot, where football fans get to feel like they are engaging with their favorite athletes. Other popular games that have caught the attention of players are Royal Fortune, King Bam Bam, Spartus, Fata Morgana, Random Runner, and many others.