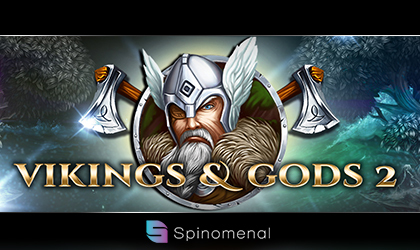 Vikings-themed slots have always been extremely popular, especially among male players, however, we are absolutely sure that this one, titled, Vikings & Gods 2, will leave no one indifferent.

What Do We Know About It?

As soon as we saw the title, we knew that it was going to be an action-packed game and this one is the perfect definition of it.

Spinomenal has outdone themselves with their latest reel slot. They’ve added something refreshing to this Viking genre and definitely set the bar really high.

This is a 5x3 reel slot that comes with exciting features along with an engaging soundtrack and top-quality graphics that perfectly complement the entire story.

This title would never be as good as it is without extra wilds, wilds and a surprising win multiplier which can be seen randomly.

Besides them, players will stumble upon almighty red-haired Viking soldiers, accompanied by attractive blonde Viking maidens and a Norse quest in the mythological realms of the Yggdrasil tree.

In order to blast-off this quest, gamers must first spin a stone compass that is placed inside an old Yggdrasil tree that shows four Viking myths:

The first one is Muspelheim volcano, the ice fields at Niflheim, Hellheim castle and Asgard which represents a place where tribe of gods Esir live.

Gamers then will get the opportunity to pick four out of seven magical items, each of them is very special.

Every single item uncovers a certain amount of money that is going to further stimulate players to give their best.

If you think that this is the end of your adventure, you’re wrong. A feature that definitely spices things up is – the casino spins feature, during which gamers will get a chance to receive a re-spin after each win that includes reels moving one row down and changing the win patterns.

During the base game, users will experience superb graphics like the flash that summons a Thor’s lightning charged hammer triggering either the win multiplier or the thunder storm which brings along more sensational extra wilds.

A Game with No Flaws:

Every single aspect of this game is mesmerizing, including top-notch animations as well as outstanding music that is some form of homage to Viking lore.

Namely, this music comes with lots of hypnotizing instrumentals that are going to make you feel like you are literally there.

“Vikings and Gods 2 is definitely one of our most intense HTML5 games and is suitable for desktop, tablets and most importantly to serve a market that’s constantly on-the-go via mobile. This showcases the development work we’re putting in behind-the-scenes to create entertaining high-quality content and further expand our available portfolio. It combines all of the modern features that make for great gameplay and a truly immersive HTML5 slot. We’re convinced players and operators are going to love it.”