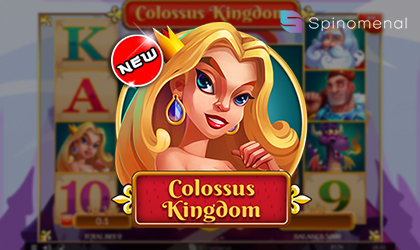 One of the leading slot makers, Spinomenal has come up with a brand-new slot that will surely indulge senses of both operators and players. Diligent and hard-working as always, they have released a second game in one month.

In order to be distinguished, they have designed a game that is a true gem among other reel slots, especially if we take into consideration the fact that it is equipped with super-interesting gameplay and well-executed symbols.

The Importance Of These Icons:

The game comes with a card deck of Queens, Kings, Aces, 9’s and 10’s. Each of them is extremely well-crafted and it gives us sort of a fairytale vibe. Furthermore, the wild here comes in the form of a Book of Spells owned by a magician, while a purple Dragon breathing fire, Centurion, a bearded King and a lovely Princess round out the cast of characters.

Spinomenal has designed this video slot, once again accentuating its talent and creativity by adding something refreshing and new to well-established themes by leveraging creative excellence in graphics, animations and gamble features.

What Else Do We Need To Know?

Colossus Kingdom comes with twenty lines and an engaging soundtrack that will remind players of those magnificent movies with mesmerizing soundtracks. Sound effects perfectly highlight the overall atmosphere and are a great addition to this game.

Those who are fans of fairytales will surely enjoy this story. As we stated earlier, the team who stands behind this game is very innovative and they showcased this virtue by building a game with a 4-3-3-3-3 reel format.

Furthermore, a big squared-off middle segment on-screen shows Colossus signs in a 3x3 reel configuration and bursts into life with giant a Colossus Spins feature, as well as a Gamble Feature during which gamers can earn up to 40 Casino Spins!

What Happens During Gamble Feature?

Once it is activated, it simultaneously activates the Slot Spins feature, allowing players gamble the Casino Spins that they have already won in an attempt to earn those staggering spins. Moreover, gamers can gamble a certain amount and after that, when the coin is flipped, they will find out whether they have won or lost something.

If you think the game ends here, you are wrong. Now, the real fun begins! A range of interesting features will overflow the reels, starting with a Wheel of Fortune, Bonus Game, Nudge Feature, and random Colossus symbols appearing in the central 3x3 game.

By virtue of this, players will get a chance to receive a lot of winning opportunities distributed across those twenty pay lines. Probably the most thrilling part of this slot is the mystery symbol. It triggers characters that stay after the reels stop and they also reveal the exact same symbol.

“A commitment to quality and innovation is central to how we conduct our business, and we are excited to deliver on our potential as we bring a fresh approach to the video slots market with the stand out features being the option to gamble and gain more free spins together with the 3×3 Colossal reel in the middle of the reels. With more games rolling out shortly, this new game Colossus Kingdom has all the versatility needed for veteran players while the easy-to-engage interface is ideal to pick-up new slots fans. With so many winning possibilities on every spin this game really is a fairytale.”