Spearhead Takes to the Stars with Meganova Slot Game Release 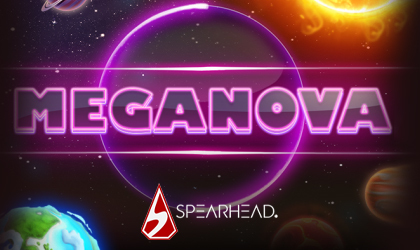 Spearhead Studios has decided to head for the stars with their latest release titled MegaNova. The game features an interesting theme that brings plenty of entertainment to the reels.

…in mind, there are also brings awesome features that will turn this intergalactic experience into something truly special.

A Journey Through Space and Time:

The developer is all about exploring the stars with this latest release to hit the market. The new title takes players away from the confines of Earth and heads off into the unknown.

…the endless expanse of space. Instead of packing a static background, players are constantly moving through space, with stars passing by on each side of the reels. Although quite interesting, the background is not the visually coolest part of the game.

It’s actually the symbols that take away that point. The lower paying symbols come in the form of card royals. However, the team behind this slot game didn’t simply take the letters and let them drop down the reels. Instead, they’ve designed them to be a part of multicolored asteroids. As for the higher-paying set, it comes in the form of various planets of our solar system.

The Clusters of Stars:

The 6x6 slot uses a cluster system instead of the usual paylines. This simple base game is more than enough to make someone’s day. However, the title goes a step further with the Meganova Wilds. The wilds can appear randomly in groups of 4. They will expand towards the center and are sticky.

This feature can also trigger a respin. Once that happens, additional wilds will appear on the reels. This can happen up to 3 times in total. If the wilds overlap, they will create multipliers. Multipliers can be either x2 or x3, and can completely change the gameplay.

Spearhead managing director, Mathias Larsson, said: “MegaNova is an excellent addition to our ever-growing games portfolio, and we are sure it’s going to be a big hit. We are right on track with our gaming releases and very confident that by the end of this year we’ll manage to establish Spearhead Studios as a reliable provider offering a vast collection of titles in many jurisdictions.”

Kevin Corti, game development director, also added: “MegaNova offers players something different than what they are expecting. We are inviting them to join a tranquil, soothing game that bursts into life whenever one or more of the wilds land. The work we’ve put into this title paid off, and we are happy to welcome it into our portfolio.”

Spearhead Studios is a rising software provider that is all about designing innovative slot games. The company currently offers a variety of slot games and other gaming content that has allowed it to quickly rise through a very competitive industry and reach key regulated markets.