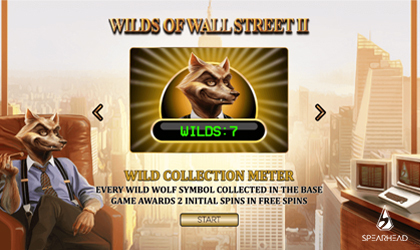 The game sees you playing the iconic role from the famous Scorsese movie, Wolf of Wall Street, a stockbroker that likes to sniff in order to make great wins.

Everything in the video slot looks luxurious; the game contains aspects from the 80's and includes cars, airplanes, choppers and characters such as bears and bulls as symbols. It also has features Wilds, and the possibility of buying an extra spins bonus round.

The title has a 1x3x5x3x1 reel layout with the option for expanding reels up to a 5x5 grid after 5 straight wins. There are 45 active paylines with a maximum win of 7500x the bet. The game offers a pretty wide bet range, which starts from $0.25, all the way up to $100 per stake. The RTP of 95.94% is slightly below the average.

Remarking on the launch, Kevin Corti declared: "Wilds of Wall Street was one of our top performers when it was released back in January 2020. Players loved the core expanding reel mechanics and the overall theme, and we felt that a sequel would be a great addition to our growing gaming portfolio.

"In Wilds of Wall Street II, we switched to a 'ways pays', rather than paylines, mechanics as it was a better fit with the core expanding reels gameplay feature. In addition, we wanted to make the free spins features much more accessible, exciting and volatile, hence we came with the idea of adding more and more wilds to the reels as the free spins progress, leading to an ever-higher potential for big wins."

The company is headquartered in Spain, and Spearhead is actually the first venture from the EveryMatrix company, specialized in slots. The provider is not only focused on bringing up their own collection of slots, but also developing table games with titles such as roulette and blackjack.