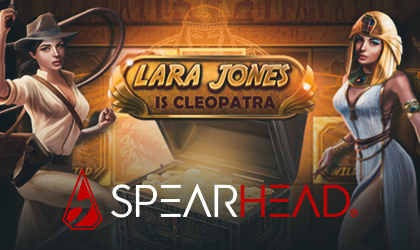 Spearhead Studios has released the highly anticipated Lara Jones is Cleopatra 2 online slot. The action takes place in the tomb of the famous Egyptian queen Cleopatra where Lara Jones goes on a quest for the treasure hidden in the tomb. The title has 5 reels, 3 rows, and 10 active paylines and here the maximum potential win is 17,000x the bet, which was the case in the original Lara Jones is Cleopatra. It’s a high volatility title and players should bet smarter to survive in the long run, although an RTP of 96.10 % is slightly above the average.

The main game has the Cleopatra Cascade spin feature in which all winning symbols become sticky and re-spin mode is activated. As for the extra spins feature, players can pick the volatility option. The game is optimized for mobile, desktop and tablet devices. The user interface is responsive for landscape mode and the title is available in different languages, currencies and is approved by all major authorities.

Spearhead invites players to follow Lara Jones' adventures to find treasures hidden in Cleopatra's tomb where during the rounds a various symbol will appear which gives better chance for generating wins!

Game Development Director, Kevin Corti says: “I am, once again, extremely proud of what our team have achieved with this game. Theâ€¯math model is extremely engaging, theâ€¯artwork is unquestionably stunning, and the audio captivates players’ attention. The Cleopatra Cascade base feature can be very rewarding for players, and the two volatility options provide them with the opportunity to seek out the bonus feature experience they most desire.”

Spearhead is one of the latest casino providers that entered the gaming industry and this brand was developed by the popular casino operator, EveryMatrix. It expanded its influence very fast, thanks to game an excellent team of inventive, talented people and industry experts who previously were employees of the Gaming Innovation Group (GiG), which was also created by EveryMatrix casino provider. It operates from main offices in Spain and the team is led by industry expert Mathias Larsson, who has a decade of experience in the iGaming industry, especially in the management field and he was previously CEO at GiG