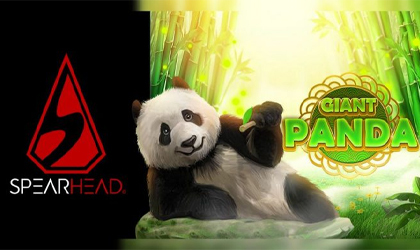 Spearhead Studios has broken news that it is dropping two new titles and expanding its portfolio. One of the titles is the Giant Panda slot game that is bringing interesting features and a fun theme.

The other game comes in the form of a Blackjack release that will expand this provider’s table game selection.

The developer is announcing two new releases that will undoubtedly enrich its portfolio. The first one is Giant Panda – a fun new slot game that is all about relaxation.

The team behind the brand went with…

…a full-on relaxing theme that is placing players in the middle of a peaceful atmosphere that’s made complete with zen music and generally relaxing sensation. Players can look forward to a 5x3 reel grid and a selection of features that leave plenty of potential within this game for major wins.

The second release on the menu is a Blackjack game. Being the brand’s second table game to hit the market, the new release is designed to be played on both mobile and desktop platforms.

The supplier has experienced a decent amount of success with the release of their original table game – the European Roulette. That experience has opened the door for more table games in the future, first of which is this Blackjack release.

Mathias Larsson, Managing Director for the brand, says: “It’s not very often to have two game releases in just one week, so we are super proud of that achievement. Our Blackjack game is specifically designed for portrait mobile play. Many other Blackjack games on the market fall short there, so we spent a lot of time and effort to get it right. Giant Panda is an excellent game with an Asian touch to it.”

Kevin Corti, Game Development Director added: “We looked at the market and only found a few multi-hand Blackjack games that were designed specifically for mobile portrait gameplay and decided to address this need. Our Blackjack games are multi-hand, feature-rich, and benefit from a very simple user interface making the player experience seamless and a true pleasure. Giant Panda is a great slot game with an appealing theme that will both surprise and delight players, especially thanks to the proliferation of multiplying wilds in the free spins.”

Spearhead is an up-and-coming software provider that has already made a name for itself by making some of the hottest games to hit the market lately. The studio is working on developing innovative games and establishing partnerships with casino operators all over the world. So far, its games can be found in several key regulated markets.