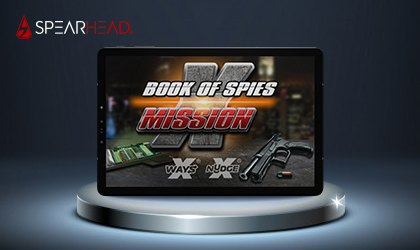 Jones guides a team of courageous special agents whose goal is to infiltrate the villain's top-secret vault and steal the Book of Spies. The special symbol is selected during the extra spins which can be spread on the reels and classified as a scatter line.

The game was developed using Nolimit City's xNudge and xWays mechanics in accordance with the agreement signed in late August 2020. XWays is an unexpected reel modifier that allows punters to play on the reels with a different number of symbols and xNudge is a wild symbol in which the win multiplier increases with each win for each step taken by the wild.

“Book of Spies: Mission X is our most innovative game to date. With its super-cool theme and cast of great characters, our team had a lot of fun designing and building it. With the xWays and xNudge features able to trigger on every spin and with the chance to get up to 21 free spins (which can retrigger), players will easily appreciate how Book of Spies: Mission X can deliver big thrills and big wins.”

Spearhead is one of the latest providers in the gaming industry created by EveryMatrix. The brand will expand the company's business into the wider area of online casino game development, as the managers of Every Matrix expect. The gaming studio is composed of a large team of talented and skilled people and industry experts who previously worked for Gaming Innovation Group, which was developed by EveryMatrix.

The company's main office is located in Spain. It is chaired by industry expert Mathias Larsson. He has over a decade of experience in the industry, specifically in management, which he has acquired over the years with established iGaming brands.