Shake the Nets in Super Strike Slot from NetEnt 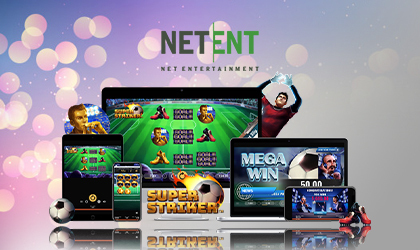 NetEnt has been busy creating awesome games since the start of the year. The latest and greatest to join their portfolio is called Super Striker.

Fans of soccer are in for a real treat as the game brings a classic slot experience paired with the fiery atmosphere of a soccer pitch.

The Derby of Potentially Massive Prizes:

Focused around the world’s favorite pastime, the new title features an enticing theme that does a great job of bringing the thrill of a full soccer stadium to the screens. Players are observing the game up high from the bleachers, allowing them a full view of what’s going on down in the field.

Symbol design perfectly matches the theme. Players can expect to see soccer players, cleats, GOAL symbols that look just like classic BAR symbols, and more. This isn’t a coincidence as this game has a very strong classic vibe to it.

Last but not the least, its sound effects add a lot to the immersion as the whole stadium comes to life with fans cheering for their teams!

What the developer did with the new release is merge the classic slot mechanics with a modern, thrilling theme. Namely, this is a 3x3 slot that offers decent potential in the base game.

For those who are looking for something…

…more, there are several special features such as the Golden Multiplier feature, the multi-level bonus spin mode as well as the Bet Slip feature.

All of these combined make for a game that can potentially make someone’s day!

Bryan Upton, NetEnt Director of Games, shared a comment regarding the title: “We can’t hope to bring the excitement of this year’s football back with Super Striker but we wanted to give fans something to keep them excited when football returns. Our unique bet-slip feature returns with bets crafted specifically for this game which adds that extra reason to play and thrills when those bets come in. Super Striker is a classic and simple game that we designed to attract any sports fan – including those new to slots and those looking for something else to do during the bleak sports betting calendar today. Chase those Golden Scatters and score some big numbers!”

NetEnt is one of the largest software providers in the iGaming industry. The company is known for delivering high-end slot game solutions and iGaming content tools. Over the years, this company has put together a massive network of partners that now include a wide array of tier one operators working in key regulated markets.