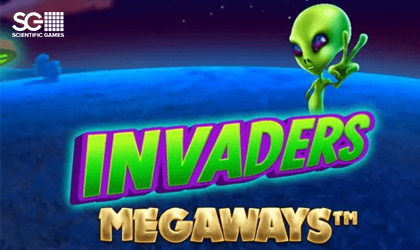 Scientific Games invites players on an exciting space adventure with online slot Invaders Megaways. The grid is placed on the fields at sunset from the UFO point of view. The game is inspired by the classic arcade game, Space Invaders, and this title has a retro soundtrack.

The mysterious adventure is played on 6 reels and 7 rows, which can be expanded up to 6 reels and 10 rows, while the number of active paylines goes from 168,070 up to 1,000,000. The RTP is 96.30%. The minimum betting option is $0.25, while the maximum betting option is $10. As for the special features, there is Uni-Cow, Loch Ness Monster, Wilds, and an exciting bonus round. Here players have a cascading win payout system, which removes all winning symbols from the grid, making space for new winning opportunities. This is a known feature of most Megaways slots, and the cascading process repeats as long as players generate wins.

Scientific Games is pleased with the latest Megaways title and 888casino is excited to offer this innovative game on their platform!

Talya Benyamini, VP B2C Casino at 888, said: “Our customers enjoy having access to exclusive games on our platform, and it has been great to offer the opportunity to experience the excitement that comes from playing Invaders Megaways™."

Rob Procter, Scientific Games’ Digital Content Specialist Director said: “While a new Megaways™ release is guaranteed to cause a buzz, in the case of Invaders Megaways™ we have set new standards in terms of both presentation and gameplay to produce a fresh, exciting new playing experience."

Scientific Games, an online gaming provider, is the name of the parent company that owns Barcrest, WMS Gaming, and Bally Tech, but it is also a complete casino company. Established in 1974, the company was first known for producing lotteries and then it expanded its library with video slots for the land-based casino market. The online casino world was relatively calm until the aforementioned companies were acquired in 2012. The software provider operates under a UK license and it has developed over 60 online slots. Its games are located in various casinos around the world and are supported by other providers. All of its content is available on all major software platforms, including desktop computers and mobile devices.