Schwarzenegger is Back in Playtech's Terminator Genisys 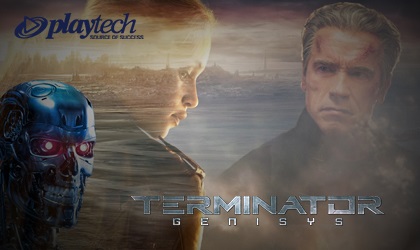 Terminator Genisys is based on the infamous Terminator sci-fi movie where Arnold Schwarzenegger must fight to not only save himself, but two innocent humans beings; Sarah Connor and her son Kyle. Playtech is the brains behind this latest slot release and the visuals, features and sounds that have been pumped into the reels are astounding. With 5 reels and 25 lines, the new title is a slot that can be played on desktop, mobile or tablet from 25p to £250 a spin. The symbols on the reels reflect items from the movie which include; teddies, rifles, brain microchips, magnetic gloves and photographs – but you will also find John Connor, Kyle Reese, Sarah Connor, Cyborg T-800 and Terminator.

The bonus features will certainly have players on the edge of their seats, what with the Terminator Chase the Car Bonus, which is a randomly triggered game. This game requires you to help Sarah and Kyle escape from the T-1000 and to do this you must collect up to 5 T-1000 symbols. Each symbol collected will award a cash prize of up to 10x your stake, a re-spin or a multiplier of 5x your stake. There are two free spins features hiding within the reels and to trigger them, you simply need to spin in three game logo scatter symbols on reels 1, 3 and 5. Just like the movie, players can choose to play; 1984 Free Games or the 2017 Free Games – which is supposed to be set in the future.

Big wins can come from spinning in a win line full of wild symbols; this will trigger a cash prize of 200x your stake. Stacked wilds, scatters and multipliers can be found during the base game and via the bonus features of this high variance online video slot, but the biggest of wins will undoubtedly fall via the bonus features – you just have to have a biggish bankroll to chase the features that like to remain hidden for as long as possible. Join the battle against the machines and try for free in demo mode at Bgo Casino.