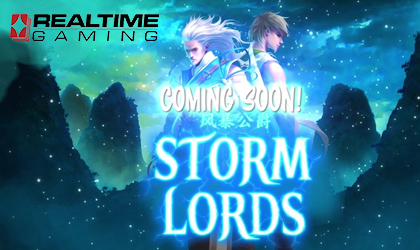 RealTime Gaming (RTG), one of the premier software providers servicing the iGaming industry, has announced the release of a brand-new slot game titled, Storm Lords. Featuring an epic Chinese-influenced theme…

…this title offers a very unique aesthetic that many players will find refreshing.

The latest release from RTG features a combination of attractive graphics and equally as attractive in-game features. The studio behind it has used a traditional Chinese theme…

…but with a unique twist. The slot has a distinct anime feel to it, which will definitely be interesting to fans of this form of Japanese cartoons.

With that said, RTG couldn’t resist adding a few elements that define every game that utilizes a Far East theme.

The background image features fully bloomed Cherry Blossoms giving some warmth to an otherwise cold and sterile scene where a snow-covered temple dominates the view.

This apparent dichotomy works well with the overall epic theme of the game. Symbol design is another area where the new release excels.

This slot uses a 5x3 grid with 50 variable paylines. Thanks to its dynamic nature, this title falls within the medium volatility category.

As far as special features go, players can expect to see expanding wilds as well as Treasure Coins. Expanding wilds cover come in the form of Cloud and Wind appearing across reels 2 and 4, completely covering the reel set.

The Treasure Coins feature is used to trigger extra spins. Players will need six or more coins. During the extra spin mode, additional coins might appear and potentially bring the grand prize if all reel positions are covered with Treasure Coins.

This latest title is available in all RTG-affiliated online casinos.

RealTime is one of the oldest software providers in the iGaming industry, having been a part of the fold since 1997. From its inception, this company has been at the forefront of iGaming product development. They are driven by a team of dedicated professionals who share decades of experience among themselves.

Such a strong driving force has allowed this company to become one of the leading brands. Additionally, they have become the go-to choice for top tier operators working in regulated markets from all over the world.

The brand takes pride in offering its content in a multichannel environment across various platforms. They have migrated most of the crowd favorites to the mobile arena, thus allowing players to enjoy their favorite slots on the go.

The company is always looking to expand its network of partners, including new operators into its portfolio. So far, their games and services can be found in almost every regulated market.