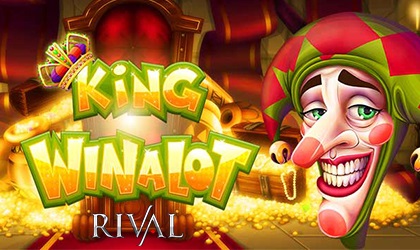 If you want to know how it feels to be wealthy and at the same time meet the royal family, then this might just be the game for you. It was developed by one of the leading suppliers of digital gaming systems and content, Cyprus-based supplier, Rival and it is their latest video slot- King Winalot.

What Do We Know About it?

Besides the fact that it has wonderful graphics, vivid colors and a generally lively atmosphere, there are some other things you must pay close attention to.

This latest title is equipped with twenty-five reels and the main members of the reels are the King himself, of course, the Queen, the Princess, the Prince and the Jester.

All of them are inviting players to their royal court to get a glimpse of their lavish and glamorous life, and why not, earn some money! The rest of the characters include, Winalot’s royal suits of Diamonds, Clubs, Hearts and Spades.

If you land at least three Prince signs on the reels, you will activate the bonus spin round. On the other hand, more than three key and lock symbols will launch the King’s Chest Pick’Em Bonus! Your goal is to unlock these treasure chests in order to earn some prizes!

And last- but not least, the slot’s namesake serves as a stacked wild, which will substitute three vertically stacked characters.

Yes, you read it well. It’s not Dracula, but Dr. Acula. Joking aside, it does actually represent practically the same person. Approximately two months ago, they developed a creepy game that is perfect for those long, winter nights where anyone can imagine ghouls and spirits lurking behind every corner.

In this 3-reel slot machine, with five pay lines, you will be welcomed by Dr. Acula and his bloodthirsty friends – bats. Although his mansion may seem intimidating, charismatic nurse will make sure that everyone feels fine, because this doctor has a cure for every illness.

Once you click the spin button, your therapy will start working! The reels are embedded with pulsating plasma bags, squirty syringe and tinkling test tubes, the doctor, the nurse and lightning sevens.

If huge winnings are your primary goal, then at least three of the blood bank icons and triple sevens are going to help you make that happen! As far as Dr.Acula is concerned, his sign acts as the wild and the jackpot!