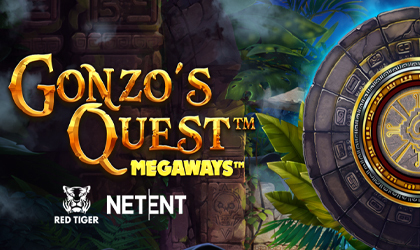 Red Tiger Gaming has launched a brand-new game that is taking players on an interesting adventure following a unique character called Gonzo on his quest.

…will lead to many interesting moments, but also a whole lot of chances for players to score potentially massive wins!

Bringing Back a Legend:

The developer’s latest release is no stranger to fans of old school slots. In fact, this company has decided to bring back one of the most popular slots in the industry.

…to become a legendary slot. Considering that NetEnt acquired Red Tiger last year, it was only logical to let this innovative provider revamp the brand’s beloved character.

Gonzo’s Quest Megaways takes place among ancient South American ruins. Players will find themselves in the middle of a thick jungle, where all kinds of potential treasures lie buried.

The visuals are incredible, to say the least. The action takes place in the ruins with Gonzo standing on the left-hand side of the reels. The atmosphere is made complete by subtle animation that includes falling leaves, water running out of the ruin walls and more. Symbol design is all about the ancient civilization that once ran this ruined city. The lower-paying tier cones in the form of simple engravings while the higher-paying symbols pack much more detail.

The title is another awesome release that runs on the Megaways mechanic. That means this slot game packs a variable number of rows per reel, which implies up to 117,649 ways to win.

Those who need a little more excitement than that, there are several special features. The game brings Avalanche Multipliers where each Avalanche offers another multiplier ranging from x1 to x5 in the base game.

Once in the Bonus Falls mode, these range from x3 to x15. There are also Unbreakable Wilds, Earthquake, and more!

Carl Ejlertsson, Director Of Business Development for the provider, said: “Gonzo’s Quest™ has consistently proven itself as one of the best slot games on the market, so we are delighted to give it a further boost with the renowned MegaWays™ mechanic. The team has worked tirelessly alongside our partners at NetEnt to deliver this summer’s most anticipated slot. We are thrilled to see the collective effort rewarded with a fantastic new release.”

Red Tiger Gaming is one of the most innovative slot game specialists in the iGaming industry at the moment. The company is constantly working on unique technologies and features that will allow them to stand out from the competition. Its games are available via their large network of partners.