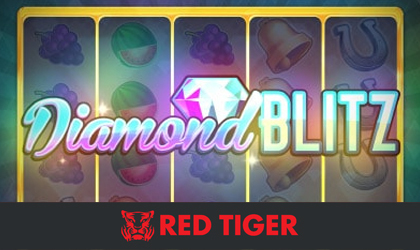 Red Tiger Gaming has dropped a brand-new slot game that is meant to satisfy the needs of eternal nostalgia. Titled Diamond Blitz, the new game is all about the familiar fruits, bars and lucky sevens in a modern package that doesn’t disappoint. On top of its awesome theme, there are a few interesting special features as well.

The developer’s new release brings a simple theme that is deeply rooted in the classic style of slot games. The team behind the brand went with a simple yet dynamic background that depicts a solid color and texture with subtle animations popping off all over the place.

The reel frame and reels themselves are a similar story. Both are utilizing bright colors and a subtle dose of animation to get the point across.

Where the game truly comes to life…

…are the symbols. Namely, the brand went with the usual suspects found in most classic slots. Fans of this genre can look forward to all kinds of fruits in the lower-paying tier while the higher paying tier is reserved for bells, horseshoes, BAR symbols, lucky sevens, and other familiar icons. Naturally, the wild comes in the form of a Diamond explaining the name of the game.

The new game is and isn’t a classic slot. This personality disorder stems from the fact that it runs on a 5x4 reel grid and 20 fixed paylines all while heavily pushing the classic style.

The same applies to its special features of which there…

…are exactly two. The first one comes in the form of a Falling Wilds feature. Namely, if a wild symbol is drawn during the base game, it will drop one spot on the reel with each new spin. The evolution of this feature is the Blitz Mode.

Once triggered, the Blitz Mode awards players with 5 bonus spins. During each spin, any wilds that appear on the reels will lock in once they reach the bottom row. That feature alone can potentially yield massive wins.

The title is based on the developer’s innovative RTG Core engine that is allowing them to build complex games that are perfectly optimized for most systems.

Red Tiger Gaming is one of the youngest and most innovative software studios to reach the top echelons of the iGaming industry. The company was founded in 2014 by a group of talented and most importantly, experienced individuals who had a clear vision.

The team assembled and started working on new games and features. Their content has won a number of awards since then, placing this brand on NetEnt’s crosshair. As a result, NetEnt ended up acquiring Red Tiger in 2019.