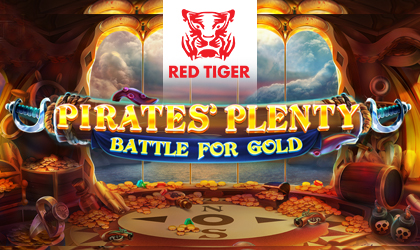 Red Tiger Gaming, one of the leading slot providers on the market, has announced the release of a brand new slot. Titled…

The studio behind this game has put together a real adventure for those who decide to go looking for gold.

On a Treasure Hunt:

Red Tiger Gaming has lined up several highly anticipated titles for the following week, one of them being this latest offering. Aside from delivering what is most likely going to be a positive experience, these titles are special because they are spearheading the use of Red Tiger’s brand-new game engine called, RTG Core.

With that in mind, this particular title offers an interesting combination of a great theme, solid base game mechanics and interesting features.

The background places the entire adventure in a storage room of a pirate ship. Full of gold and other loot, the room hides all kinds of treasure.

Needless to say, this is another highly attractive slot from the brand which their fans are more than used to by now.

Base game mechanics and the overall configuration of the game is rooted in a 5x4 grid that runs on 20 to 30 paylines. Players will be able to adjust the number of paylines they want to use. With that said, the maximum win is estimated at 5,000x the original bet.

As far as volatility goes, this is one of the most volatile titles in the supplier’s portfolio. It’s a similar situation with the hit rate.

The game also comes with a number of interesting features. The studio behind this title has gone above and beyond in terms of mini-games. Because of that, players will…

…enjoy map quests, skirmishes with other ships and battle spins.

The title will be available in all affiliated online casinos on August 22, 2019.

Red Tiger has recently announced the development of a brand-new game engine called, RTG Core. The new engine brings several benefits in comparison to their previous standard. The most obvious improvement comes in the form of increased performance. Games running on this engine will have higher frame rates and look much smoother.

That improved performance also means that the supplier can now deliver more technically complex games without players suffering any issues.

Aside from performance, compatibility is also another area of improvement. The team who worked on the engine has announced that the new engine allows for seamless integration on various platforms and infrastructure. As a result, the brand can release titles that will run smoothly across different devices as well as operating systems.

Lastly, such a powerful game engine allows Red to remain innovative and release products that meet the needs of the market as well as the standards of quality set by this company. The engine perfectly represents its commitment to “the science of fun.”