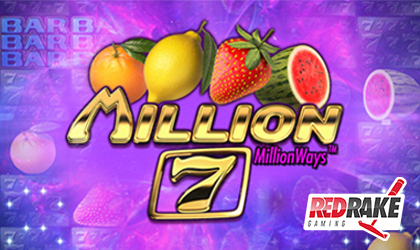 Red Rake Gaming, one of the premier software providers in the iGaming industry, has announced the launch of a brand-new slot game inspired by fruits. Titled Million 7…

…the new release is promising to pique the attention of players who enjoy this classic theme. However, the supplier has included a few surprises which are bound to up the ante!

Fruit-themed slots are definitely a crowd favorite and Red is no stranger to making some of the best. The latest in their lineup of fruit slots brings the…

… classic aesthetic with an interesting twist!

The game features a modern but simple theme that is the same across all platforms. Red Rake went with a more conservative layout that is devoid of any overbearing animations or intense…

…details that might take away from the gameplay. Speaking of which, the gameplay is not what most expect to see when they hear about a new fruits slot.

This is a 6x10 reel setup that utilizes up to 1 million ways to win. That greatly increases the player’s chances of scoring a high bonus.

In terms of special features, the brand offers the Money Collect feature that converts symbols into banknotes and thus…

…add to the overall win amount. Next up is the Frenzy feature that is triggered by Gold M symbols. Once in this mode, the player is awarded interesting bonuses which include extra spin multipliers as well as a mini-game mode.

Last but not the least, there is the Gold or Scatter 7 symbols which can bring a 100x or 200x multiplier to the spin.

The game is currently available in all Red Rake Affiliated online casinos.

Red Rake is one of the most popular software providers that operate in the industry. Their titles include some of the best-received slot games and other iGaming content on the market.

The company started out in 2011 and mainly stuck to the social casino gaming scene. It wasn’t until…

…2015 that the company got into the real money aspect of the business. Since then, they have come up with some of the hottest slot games on the market, including quite a few award-winning titles.

RRG is also offering complete B2B solutions for clients who need simple APIs that encompass all of their content management needs.

Aside from delivering such solutions, it is constantly developing its operator tools. The goal is to give their clients complete control over the player’s experience as well as any promotions they have going on.

…they have proven to be among the very best. Thanks to their impeccable reputation, RRG is constantly on the lookout for new deals and new partners that will give them access to newly regulated markets.

With a dedicated team driving the brand forward, this studio is enjoying steady growth across all metrics.