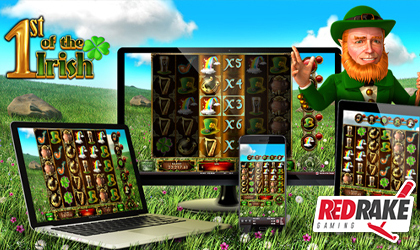 Red Rake Gaming (RRG) is bringing back the Celtic vibes with the release of the 1st of the Irish.

…a game focused around Irish legends. Aside from a cool theme, this new game also brings a few things aimed at spicing up the whole experience for the players.

The Luck of the Irish:

The developer has been churning out awesome games recently. This latest release comes as the icing on the cake for the end of this month.

The company has decided to…

…treat players with a view of rolling, lush green fields and clear blue skies. There is a tangible sense of tranquility emerging from the background. Just like it is the case with most games that share this particular theme, the interesting graphics are almost always on the reels themselves.

Players will get to enjoy all kinds of traditional Irish iconography. There’s the golden harpies, the green leprechaun hat, pints of Guinness, four-leaf clover, and much more!

Aside from the cool aesthetics, the title is a 5x6 slot packed full of awesome features. Namely, the game comes with 5 separate meters.

…filled little by little as players draw different symbols on the reels. There are the Pipe, Beer, Hat, Shamrock, and Rainbow meters.

All of these can be filled out simultaneously, resulting in various combinations of…

…prizes and wins. When the Pipe meter gets full, it releases a special symbol tied to a multiplier. Players then win the amount calculated by multiplying the base wager with the multiplier and the number of times the special symbol appeared.

RRG is one of the leading software providers in the iGaming industry. The company was founded back in 2011 with the goal of building and releasing high-quality social casino content. After achieving a considerable amount of success, the brand has decided to switch over to the real money side of the business. The company’s first real money slot game was released in 2016 and it hasn’t looked back since!

These days, it follows a tight schedule and drops new games that are designed to give players a better overall experience.