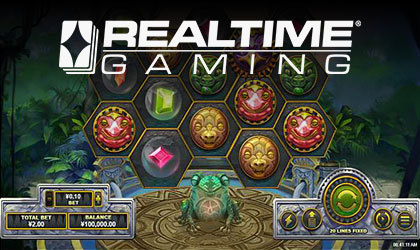 Fans of unconventional slots will absolutely enjoy this release with its quirky frog theme and interesting core mechanics.

An Interesting Take on Slots:

The developer is known for doing things their way. Slot games made by this company are often…

…unique in some way, be it the choice of graphics or a special feature of some kind. With this title, RTG has once again proven that they are all about providing a new, exciting experience for their users. The game itself…

…looks quite impressive thanks to its theme. Namely, the action takes place deep in the jungle, on a stone plate surrounded by lush greenery. At the center of the plate, players will encounter a frog. Fans of the old Zuma games will get déjà vu as the frog spits out symbols on every spin.

The background, including the frog, is animated. This gives the game a very immersive feel as it brings its unconventional reels that much closer to the player.

As far as symbol design goes, the developer’s creative team did a great job of avoiding the usual card royals. Instead, they went with a set of gems for the lower-paying set and a set of detailed animal inspired, fully animated icons for the higher paying set.

Taking the Reels in a Whole New Direction:

One place where the supplier truly went off-script are the reels. The game features as 5x3 grid that runs on 200 paylines. The reels are offset in a zig-zag pattern with every individual cell featuring a hexagonal design.

Another interesting thing about the game mechanics is the lack of special symbols. Namely, this game doesn’t have wilds or scatters. This also means that there are no special features usually associated with these symbols. Instead, you’re getting the Exploding Frog feature that turns a number of surrounding symbols into whatever symbol exploded.

The other special feature is the Cascading Wins. Whenever you score a winning combination, the winning symbols will disappear and a new set of symbols will take their place. This way you have a better chance of scoring…

…another winning spin as you play.

Realtime is a software provider known for its high-quality slot games and other iGaming content. RTG has shifted most of its slot production to RTG Slots – an Asian division that has been…

…producing most of the latest slots for the brand. This division was mainly focusing its games on the Asian markets but are now creating global releases as well. With over 20 years of experience in the industry, it has become one…

…of the most trusted authorities operating today.