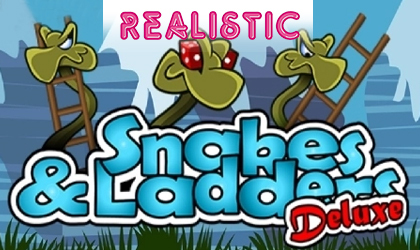 Realistic Games has launched a brand-new slot game titled Snakes and Ladders Deluxe. Just like many other games from this…

…provider, it comes packed in a virtual 3D cabinet.

Virtual cabinets have proven to be a unique feature that gives classic slots more depth.

Realistic Games has released a number of successful games so far. With that said, Snakes and Ladders has always been one of the most popular games in their portfolio. Because of that, the company has decided to completely revamp this legendary slot and put it inside one of its more recent 3D cabinets.

As a result, the game has gained an upgraded visual component that makes it attractive. This company’s idea to use a virtual cabinet allows them to improve the aesthetics of the game far beyond its theme, background and other typical areas where graphics make a difference.

The original game was known for its core game mechanics. The developer has kept the same math model used in the first game. With the same, proven game mechanics, players will also see the 600x the original bet maximum payout.

The game runs on a 3x3 grid with fixed paylines. Since it is confined to a virtual cabinet, the studio has used two separate displays. The bottom one is where the actual reels are located, while the other one is right above the first and facilitates the snakes and ladders mini-game.

Speaking of which, the game works by having the player roll a pair of dice, which in turn moves the player around the board. Depending on where the dice land, players will be treated with various prizes.

Realistic’s latest game delivers an estimated RTP of 95%, making it one of the more exciting slots to play. The company has also started releasing HTML5-based slots, which its latest release is an example of.

As a result, the game can be accessed from a number of different platforms.

Robert Lee, Commercial Director, commented on the new release: “Snakes & Ladders, a favorite with both operators and players, has maintained its position as a top performer in our catalog and will undoubtedly continue to deliver with the new polished look. The nostalgic board-game theme resonates with all types of players and with the improved graphics, sounds, and assets, Snakes & Ladders Deluxe makes a valuable addition to our growing collection of 3D titles.”

The game will be available in all affiliated online casinos.

Realistic Games was founded in 2002 and is a software provider that supplies B2B clients in the iGaming industry. The company is known for delivering their slot games inside virtual 3D cabinets, thus giving digital online slots a very old-school, land-based feel.

While initially offering their games through third-party platforms, it didn’t take long for the brand to realize that generating exposure that way simply wasn’t enough.

In order to meet their standards of performance, the company has spent 2 years designing and building their own platform called, Realistic Game Library.